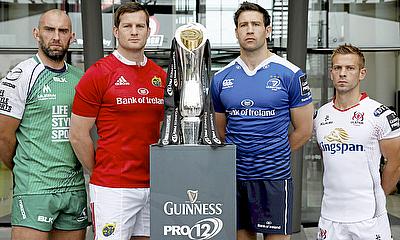 It is fair to say that the 2015/16 European Rugby Champions Cup was not one that Guinness PRO12 fans will remember fondly.

The Celtic nations’ former European powerhouses all limped out at the pool stage of the tournament, with the Ospreys and Ulster the closest to making it to the quarter-finals, the former missing out by virtue of their head-to-head record with Exeter Chiefs and the latter a solitary point away from being in the mix for a best runners-up spot.

The story was slightly better in the Challenge Cup, where both Connacht and Newport Gwent Dragons emerged from the pool stage. Connacht lost a thriller to Grenoble in the quarter-finals whilst the Dragons dispensed with Gloucester, before being found out by Montpellier in the semi-finals.

The question now is whether or not that disparity at European level between the PRO12 teams and their rivals in the Aviva Premiership and Top 14 will be maintained (or increased) in the 2016/17 season, or can it be bridged?

Unfortunately, the answer is not particularly optimistic for fans of the PRO12.

The world loves a good underdog story but it is safe to write off Zebre already. A solitary home victory every few years is the limit of the Italian teams in the competition at the moment and sitting alongside Wasps, Connacht and Toulouse in Pool 2, it’s hard to see them even picking up that this season.

With just one representative this season, Wales’ chances look similarly grim. The Scarlets played some very effective rugby at times last season and have strengthened well, bringing Jonathan Davies back to Parc y Scarlets amongst a number of other additions, but the draw has not been kind to them. They share Pool 3 with reigning champions Saracens, three-times winners Toulon and Sale Sharks. In another pool you might have considered Scarlets as a contender to pick up a best runners-up spot but alongside Saracens and Toulon, their chances are slim to none.

Scotland will also only have one representative in the 2016/17 edition of the tournament and Glasgow Warriors find themselves in a pool with beaten finalists Racing 92, Leicester Tigers and Munster. Racing will be hot favourites to top the group and with Leicester’s current upward trajectory, not to mention their raft of summer recruits, Glasgow will do very well to finish in the top two and at least put themselves in the mix to qualify.

Where the PRO12’s real hopes lie are with the Irish provinces, as has been the case for the majority of the last decade.

Munster’s hopes look slim in that pool alongside Racing, Leicester and Glasgow but Rassie Erasmus is a savvy rugby man and if he can rejuvenate the squad somewhat in the short amount of time he has between now and the opening round, they are not a side to be ruled out. Realism, however, suggests being competitive may be Munster’s ceiling at this point in time.

Ulster are interestingly poised in Pool 5, facing off against the Exeter Chiefs, Clermont Auvergne and Bordeaux Bègles, three teams who know each other very well from last season’s pool stage. Clermont aren’t quite the imposing side they once were but with Exeter and Bordeaux improving significantly over the last two years, it will be a difficult pool to traverse. The additions of Charles Piutau and Marcel Coetzee (once fit) will help Ulster but the odds will still favour Exeter and/or Clermont to emerge from Pool 5.

Speaking of Exeter, the PRO12 champions Connacht are in a very similar situation to where the English side were two or three years ago. Having made it into the Champions Cup playing a brand of very exciting, albeit quite loose, rugby, Connacht will now be faced with a large step up in quality of their opposition. That brand of rugby cost them against Grenoble in the Challenge Cup last season and their pool opponents this year – Wasps and Toulouse – will be keen to exploit it. It took Exeter a couple more years to balance their game and work out how to win in Europe and the same could be true of Connacht this season. That said, with Zebre potentially providing them with 10 points in Pool 2, they could well be in the quarter-final mix, especially if they can pick up home wins against Wasps and Toulouse.

As is often the case, Leinster bear the expectations of both the PRO12 and Ireland. They have been drawn in Pool 4 alongside Challenge Cup champions Montpellier, Northampton Saints and Castres. There is nothing easy about that pool, which can admittedly be said about all pools in the competition, but it is escapable for the Dublin-based side. Jake White’s Montpellier has its critics but it is a fiercely effective side and will go into the competition as favourites to top the pool. If Leinster can stay injury-free, however, they have a good shot at pipping the French side or, at the very least, being in the mix for a best runners-up spot.

Leinster and Connacht both have good chances of making the quarter-finals and from there they will have confidence of making a run at the title. With teams like Saracens, Racing 92, Montpellier and Leicester all looking considerably stronger than they were last season, it would be bold to predict a PRO12 side winning the tournament, but there should at least be representation in the knockout stages this season.

As for the Challenge Cup, the Ospreys look fairly well set for a decent run in the competition but with both Bath and Harlequins also in the second tier tournament this season, they could face stiff competition in the knockout stages. Cardiff Blues will have to contend with Bath, Pau and Bristol to get out of their pool, whilst Edinburgh will need to see off Harlequins, Stade Français and Timisoara Saracens. The Dragons could once again make a run on the knockout stages, facing off against Brive, Worcester Warriors and Enisey-STM. As ever, the seriousness with which the French teams choose to take the competition will have a strong bearing on who qualifies and as of right now, there is no predicting that.