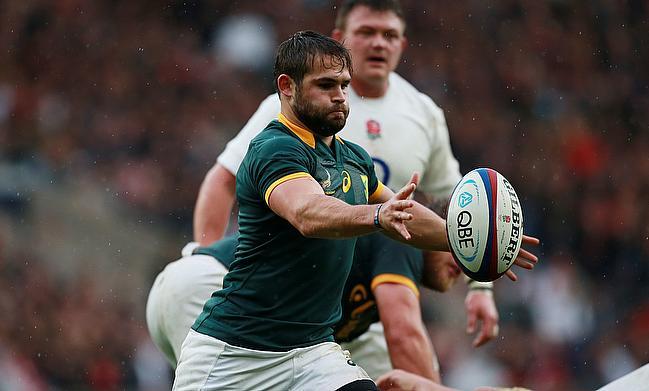 Cobus Reinach helped Northampton sneak into the top four, despite the Saints losing at Exeter
©PA

There were still four more tries to come in the first half as Ben Moon and Don Armand crossed the whitewash for Chiefs with Simmonds converting both scores.

For Saints, Rory Huthcinson and Cobus Reinach helped Dan Biggar to equalise the scores at half time with Reinach’s try coming when the visiting side were down to 13 men.

? @ExeterChiefs secured #GallagherPrem top spot with an impressive bonus-point win over @SaintsRugby - who they'll meet in the semi-finals next weekend ????

Despite conceding three tries in the second period, coming from Matt Kvesic, Dave Dennis and Luke Cowan-Dickie, Northampton still qualified for the semi-finals next weekend, where they will be travelling back to Sandy Park to try and better this week’s result.

Stand in scrum-half Tom Whitely ended the deadlock just six minutes in, slotting a penalty after an indifferent start to the game. A Worcester try from former Hurricanes man, Michael Fatialofa, took them into the lead and Duncan Weir converted to start his day off on a good note. Chris Pennell would cross the whitewash to close his testimonial year, with Weir converting again.

Whiteley kicked two penalties to close out the first half and he also converted Nick Tompkins’ try to edge the visitors in front.

The second half was more free-flowing, with a Whiteley penalty preceding Ted Hill’s 54th minute effort. Marcelo Bosch then registered an effort of his own, on one of his last games before joining Burton Rugby Club.

Another Saracens penalty was shortly followed by a converted Josh Adams try, leaving Warriors just one point behind their visitors. Duncan Weir won the game after the 80 minute mark, with yet another nerves of steel penalty, to snatch victory from the European champions.

A last gasp missed penalty from Scotland international James Lang meant that Quins couldn’t reach the semi-finals of the competition. Marcus Smith kicked the first points of the game, but it was Josh Bassett who crossed the try line first, with Lima Sopoaga converting the score. Joe Marchant gave Smith the opportunity to equal the scores but spurned the chance. The final action of the half was a Sopoaga penalty, giving Wasps the half time lead.

Not the way we wanted to finish the season and apologies to the @Harlequins fans that you’ve not got a SF to look forward to. Shout out to all the boys who’ve played their last game for Quins and thank you Quins fans for all your support this year ?? pic.twitter.com/sWXy9ZlA30

Wasps scored two tries early in the second half, Joe Simpson dotting down twice on his last hurrah for the club.

Sopoaga converted both tries to give the hosts a commanding lead. Danny Care’s effort was converted by Lang, bringing Paul Gustard’s side into contention.

Lima Sopoaga’s penalty would be the final score for the hosts, but Elia Elia’s converted 75th minute try did put things in the balance however, Quins couldn’t clinch the win.

A fairly dull first half was only broken up with Charles Piutau’s ninth minute unconverted try being the only talking point, with neither side able to take a foothold in the clash. The second half had more points, but still didn’t make this the game of the weekend. Efforts from Piers O’Conor and Jack Lam were converted by Callum Sheedy. Gary Graham and Johnny Williams would score tries late on, with Joel Hodgson converting the Scotman’s effort, but ultimately, Falcons left the Premiership with a whimper.

A helter skelter affair at the AJ Bell, in which the home side eventually came out on top, Sale's win still wasn't enough for them to clinch a Champions Cup place.

In the second half, Gloucester’s points came in the form of tries scored by Dom Coetzer and departing scrum-half Vellacott collected his second try of the afternoon, Evans was only able to convert one of these efforts. Evans’ final action of the game was to kick a penalty.

AJ MacGinty would score a penalty to secure victory, but he also converted two tries, one being scored by the USA international and the other by Byron McGuigan. The effort that proved the difference was Denny Solomona’s remarkable try in the corner. A truly magical finish to a superb game.

Leicester’s season came to an end in much the same fashion their campaign had gone; underwhelming. They started poorly and conceded a second minute Anthony Watson effort. Tigers overtook their visitors thanks to a George Ford penalty and a converted Brendon O’Connor try. Joe Cokanasiga’s 11th minute try had its conversion missed, but O’Connor’s second try would be.

Added to this, three more Ford penalties gave Tigers a healthy lead at the break. Rhys Priestland ended the half with a penalty and Bath took control in the second period as Beno Obano had his try converted by Burns.

Tigers wing Clayton Blommetjies’ try in the corner had its kick missed by Ford, giving Leicester the lead until Bath’s late winner. Jacques van Rooyen trundled over the whitewash and it meant that Priestland had to convert the try to win the game, which he promptly did, securing Champions Cup rugby next season.