Premiership clubs to release US players 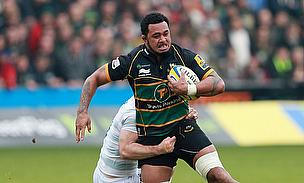 American players on the books of Aviva Premiership clubs will be released to play against New Zealand in a fixture on 1st November.

Premiership clubs were not obliged to release their players but came to an agreement with USA Rugby that ensures that players selected will be released.

Samu Manoa (Northampton), Chris Wyles (Saracens) and Blaine Scully (Leicester) are among players likely to be called up.

"This is a significant milestone in the development of the game in the USA," Melville said.

"It is unfortunate that such an historic game could not be played under the (IRB) regulation nine release window.

"We will be playing the world champions, New Zealand, in an iconic football stadium, in front of a record 60,000 capacity crowd with a live broadcast via NBC with a reach of over 115million homes in the USA.

"It is a huge opportunity for our players, coaches and fans to participate in this game and we appreciate the support of Premiership Rugby regarding player release for the game.

"The other three matches in November provide opportunities for some of our younger players to play for the Eagles and to stake their claim for a place in the 2015 Rugby World Cup."

Premiership Rugby chief executive Mark McCafferty added: "We have a very good relationship with USA Rugby and we have responded to their request to ensure all their best players are available to play against New Zealand, on what will be an historic occasion.

"As we help grow the sport in the USA, it is essential to support a match of this quality which has clearly captured the interest of the American supporters."