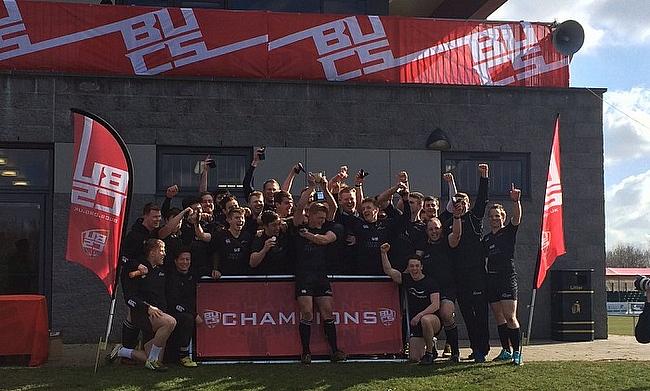 With the BUCS Championship finals taking centre stage next week at Twickenham, the attention was on the BUCS Vase final as well as our other featured university leagues this week.

The BUCS Vase trophy was won by Northumbria against Bristol after victory in Sheffield as the north-east side ended the campaign on a high after finishing fifth in the regular season.

Across the BUCS leagues, newly crowned Northern 1A champions Durham 3rds champions were defeated by Leeds Beckett 2nds while there was joy for both Nottingham University sides in Midlands 1A as they survived the drop as Oxford Brooks and Coventry fell through the trap door.

Premier North A side Northumbria University ended the season as winners of the BUCS Vase as they beat the University of Bristol 24-20 at Sheffield Hallam on Wednesday.

After the success of their Women’s 1st XV reaching the BUCS Championship final next week, the men’s side sealed a piece of silverware for the north-east University to end their campaign on a high.

It was Bristol who led 15-12 at half-time though, thanks tries from Ollie Wetton and Dave Watchorn while Northumbria responded with scores via Charlie Parkhouse and Struan Hutchinson.

Hutchinson then grabbed his second after the break as Northumbria went ahead and Parkhouse shortly followed to double his tally for the afternoon and stretch his side’s advantage.

Centre Will Sharett then reduced the deficit for Bristol as he rounded off a simple move on the 52nd to go over, but the Premier South A side just couldn’t find another break through, but this was a great effort from the team after their Varsity match against UWE on Monday.

So Northumbria ended the 2015/16 term fifth in Premier North A having picked up two wins throughout the domestic season, but three straight victories in the Vase means they have completed the season in a positive manner.

As for Bristol, they also finished fifth in their division having won four of their 12 games this campaign.

After securing the Premier North B crown last week, Loughborough University’s 2nd XV ended their domestic season by beating the University of St Andrews 7-66 away from home.

Loughborough will now be part of the new North A league which will be in place next season after winning 13 of their 14 games this campaign. As for St Andrews, they have finished bottom of Premier North B and will be involved in the renamed North B league for the 2016/17 after winning just one of their 14 matches after promotion from Scottish 1A.

Second placed Bishops Burton were once again not in league action as they were involved in the BUCS Trophy final against Hartpury College 2nds and it was the Premier North B side that clinched the glory. Bishops Burton won 13-21 to win the trophy and they now have one league fixture remaining when they take on the University of Birmingham next week.

Durham 2nds couldn’t cement their fourth place finish in Premier North B after they were beaten 27-32 at home by the University of Worcester. Durham, who have won seven games this season, now must wait for the outcome of Birmingham’s game with Bishop Burton next week to see if a top four spot can be achieved. As for Worcester, they have ended the season in seventh place winning three of their matches this year.

Worcester Head of Rugby Michael Hill:  “I was very proud of the boys yesterday and just wish we had been able to finish of some other game this year like we did yesterday. Durham looked very strong from the off and had some strong direct carries which gained them quick ball on the front foot.

“We were able to grab a catch and drive to stay in the game 24-7 at half time. In the second half with the realisation for the thirds year that it was their last game everything came together with great pressure defence which resulted in turnovers for us. Our scrum and line out then got on top which turned the tables and we scored from another well organised maul.

“Later on it was time for our back 3 to start stretching their opposite numbers and finished off some great team tries. A real great team performance!”

Champions Durham 3rds ended their successful season with a sobering 34-7 defeat to second placed Leeds Beckett 2nd. Durham were crowned winners of Northern 1A after their only really challengers, the University of Hull, were beaten by the University of Sheffield on Saturday.

This defeat meant that Durham completed the campaign with 11 wins from 14 matches and will be applying their trade in the newly formed North B division next season. As for Leeds Beckett, they are currently second this term after picking up nine wins this season.

After their title ambitions were dashed by a 57-3 defeat to Sheffield on Saturday, Hull bounced back with a 22-21 win over Manchester Met to secure them a minimum of third spot in the table. It has been a great season for the Humberside outfit considering they were promoted into Northern 1A for this campaign and do have the chance to finish second as they sit level with Leeds Beckett and they still have two games left to play.

Second place from Northern 1A may still be promoted alongside Durham 3rds, but they will have to be the best runner-up out of the University of Warwick from Midlands 1A and potentially the University of Strathclyde (if they decide they want to opt in) from Scottish 1A.

As for Man Met, they have now been relegated after just one season in Northern 1A. They still have one game left to play against Hull next week, but after the University of Liverpool drew 14-14 with Sheffield it means the north-west side have now finished seventh in the table.

That draw for Liverpool means they are sixth and are safe from the drop for now. If the runner-up from Northern 1A (whoever that maybe) is not promoted then Liverpool, after finishing second last season, will also be relegated alongside Man Met and York as Northern 1A is becoming a six team league next season.  As for Sheffield, they are likely to end the season fourth after winning the division last year.

Loughborough University’s 3rd XV have already confirmed their place in North B next season and second placed the University of Warwick will have to wait to see if they will join them in that newly formed league, but the relegation battle in Midlands 1A was still ongoing heading into the final week of the season.

Nottingham Universities 2nd and 3rd XV’s along with Oxford Brooks were all fighting for their survival and it was both Nottingham sides who ended up outside the bottom two thanks to victories. Nottingham 2nds beat Oxford Brooks 19-14, while the 3rd XV beat already relegated Coventry University 36-0, but the game was called off after a neck injury to a Coventry player.

After heartbreak in the conference cup-final last week, Lancaster University responded by winning the Northern 2A title on Wednesday after a 3-17 victory over UCLan. Lancaster, who were relegated into this division last season, have won eight of their 10 matches this campaign and will be back in Northern 1A next term.  As for UCLan, they have ended the season fourth after five wins and five defeats this campaign.

Elsewhere, second placed Keele thrashed Chester 77-9 to finish runners up in Midlands 1A for the second year in row while Chester end a positive season in third.

Midlands 2A champions Nottingham Trent University ended the season with a walkover result against the University of Lincoln, who had their relegation confirmed on Wednesday. The league’s bottom side finished on -3 points due to the fact they couldn’t field a team on occasions this campaign while in contrast, Trent won nine of their 10 league games as well as the cup final against Northampton.

Elsewhere, Nottingham 4ths thrashed the University of Derby (Buxton) 14-87 meaning Derby, who may yet still be relegated, have ended the year with a points difference of -446. As for Notts, they finished the season fourth after six wins this term.

Warwick 2nds were given a walkover result against second placed Harper Adams 2nd to end the season third in the table.