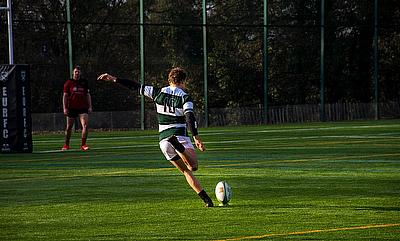 With our featured game being at Loughborough this week (above), we take a look back at the rest of the action from our featured BUCS sides where as usual, there were highs and lows for teams across the country

Alex Craig and two Gareth Thompson penalties gave the home side a 13-7 half-time lead. Beckett were able to tie things up with two penalties of their own after the break before Hartpury’s brute force up front paved their way for them to retake the lead.

Thompson converted for 20-13 and Hartpury looked as though the win was secured until a last minute try from Leeds set up a grandstand finish. However, the conversion went inches wide and Hartpury were through.

Premier South A champions the University of Exeter remain unbeaten this season as they cruised into the last four thanks to a 39-5 win over Newcastle University.

Tries from Adam Worth, Harry Ledger and Ollie Claxon along with a penalty from Gavin Parker gave the home side a 22-0 half-time lead.

Newcastle opened the second-half with a try of their own but that was as good as it got as Sam Waiter, Freddie Hosking and Paul Davis all crossed for Exeter to guide them into the last four.

Added to this for Exeter is that both their men’s and women’s side are through to the semi-finals of their elite competitions so silverware could well be heading down towards Devon come the end of the month.

Their opponents next week will be Durham University as they beat the University of Bath 28-3 in the north-east to advance into the semi-finals for the first time in three seasons.

Brodie Wilson added to an early Durham score to give his side a 14-0 lead at half-time before Zack Henry got the first points on the board for Bath from the tee just after the restart.

But then the hosts took control as a rolling maul paved the way for their third try of the evening before Rob Stevenson darted over to round off the win for Durham.

The Premier South A side will take on Northumbria in Newcastle next week while Bristol will host either the University of Leeds or University of South Wales whose game was postponed on Wednesday due to snow and is set to be played in Wales on Sunday or Monday.

The only fixture in Premier North B this week saw league leaders Loughborough 2nd XV suffer their first league defeat in 25 matches as they were stunned by fifth placed the University of Birmingham  29-24.

This was Loughborough’s first defeat in 12 games this term, but they still remain top by seven points with two games remaining while Birmingham picked up their fifth win of the season as they move closer to safety in Premier North B. They are currently 13 points clear of the bottom two, but the University of Manchester have three games still to play.

With table toppers Durham 3rds in cup action, Northern 1A continued to role on and the focus was down at the bottom of the table.

Last year’s runners-up Liverpool are fifth in the table as things stand and are six points off the bottom two with two fixtures remaining this term. As for York, they sit at the foot of the division having won just twice all season and are currently 10 points from safety.

Elsewhere, Manchester Met took a huge step towards survival as they picked up a 41-24 win against relegation rivals Newcastle 2nds. Man Met are sitting in the bottom two and are now just five points behind Newcastle who sit above them in the table. In addition to this, the north-west side also have a game in hand over Newcastle so their fate is now in their own hands.

Loughborough University’s 3rd XV have won the Midlands 1A title after the University of Warwick were beaten by Oxford Brooks 31-17 in their final league game of the season.

Second placed Warwick knew that a win of any kind would keep their promotion hopes alive, but they were thwarted by an Oxford Brooks side desperately fighting relegation from this division. Warwick have now played all 14 of their league matches and finished the season with 10 wins to their name while Oxford Brooks are now four points from safety with one game left to play against Nottingham 2nds next week.

So, the league leaders Lougborough are champions with one game left to play and their result against already relegated Coventry University was solid evidence to why they have won the title. They won 60-5 at home on Wednesday making that their 11th win of the season.

Elsewhere in Midlands 1A, third place Harpers Adams – who play Loughborough next week in the final game of the season – comfortable saw off Nottingham 2nds with a 38-0 victory. Harper Adams are now just three points behind Warwick so a win against Loughborough would see them finish second for the season.

Also in Midlands 1A, Nottingham 3rds gave their survival chances a major boost as they edged out the University of Leicester 27-28 away from home to move four points clear of the danger zone.

Nottingham take on Coventry next week in their final game of the season knowing a minimum of two points will keep them in this division. As for Leicester, their campaign has tailed off slightly after starting so brightly. They lost four of their last five games of the season and have finished fourth this term having won eight of their 14 games.

After being crowned Midlands 2A champions last week, Nottingham Trent 2nds’ season got even better yesterday as they have advanced to the final of the Midlands Conference Cup after beating the University of Northampton 10-15.

After this victory over the Midlands 2B side, Trent will now take on the University of Birmingham 2nds in the final at Coventry next Wednesday after their 10-18 win over Harper Adams College 2nds.