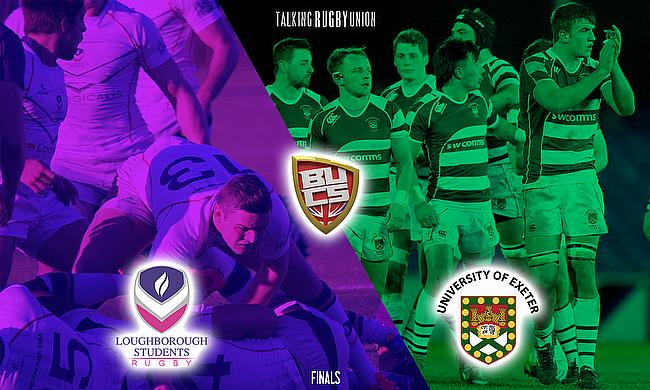 The University of Exeter and Loughborough University will be the two finalists for the this year's BUCS Rugby Championship that takes place at Twickenham in two weeks’ time.

The Premier South A Champions and Premier North A winners beat Durham University and Hartpury College in the semi-finals to progress to the final which will take place on March 23rd.

In the Women’s Championship final, Northumbria University will take on last year’s runners-up Cardiff Met after victories over Exeter and Gloucestershire University respectively. Northumbria also have another team in a final as their men’s 1st XV will play Cardiff University in the BUCS Vase final in Sheffield next week.

Elsewhere across our featured BUCS leagues and competitions, Loughborough 2nd XV were crowned Premier North B champions, Manchester University took a huge step towards safety while in Northern 1A, Durham 3rds' title ambitions suffered a setback.

In the BUCS Northern Conference Cup final, Lancaster University were beaten by Premier South B side Sheffield Hallam.

The University of Exeter progressed into the BUCS Championship Final after a superb display against Durham University.

Two penalties put the hosts ahead early in this encounter before, bizarrely, a fallen tree put a stop to the game. But that didn’t affect Exeter who pushed on to run in three tries before half-time as they established a 23-0 lead.

Another score and a penalty stretched the Exeter’s lead before Durham finally got over the line for 31-5.

Exeter then had a player yellow-carded and the visitors took full advantage to claim a second try, but the home side had the final say with their fifth score of the afternoon to secure their place in the Twickenham final.

Unfortunately, there was no such joy for Exeter’s women side as they were beaten 30-5 by Northumbria University who will meet Cardiff Met at Twickenham in two weeks’ time after they edged out Gloucestershire University 6-0 in a re-run of last year’s final.

A late Josh Sharp penalty sealed Loughborough University’s place in the BUCS Championship Final after a 15-14 win over Hartpury College.

This tightly contested affair was arguably Loughborough’s toughest game this season, but Sharp ultimately booked their place at Twickenham for the second year in a row.

Tries from Sam Pointon and Dan Watt had given the hosts a 12 point lead before a Gareth Thompson penalty and a try from Alec Clarey brought Hartpury back to within a point of the Premier North A champions.

Thompson then nudged his team in front for the first time in the game on 59 minutes before Sharp put Loughborough back ahead three minutes from the end as he landed a penalty.

The home side were then clinging on to their lead and were penalised for trying to slow down the ball. That presented College with a chance to win it with the last kick of game, but it sailed wide.

So, it will be Loughborough who will join Exeter at Twickenham in two weeks’ time for the biggest prize in University rugby. Loughborough have won all 14 games this season and have not lost since their final defeat to Leeds Beckett just under a year ago. As for Exeter, they are also unbeaten this term, so something has got to give when the sides clash at English rugby HQ on March 23rd.

Loughborough Coach Ciaran Beattie: It is a great achievement for all involved. It couldn't have been tighter, and Hartpury played some great stuff so we are delighted to come away with the win and once again into the final.

The challenge now is for everyone to reflect on the lessons learnt from last year so as we can go one step further and win.

Hartpury College Senior Academy Head Coach John Barnes:  It was a much better performance than against Leeds Beckett and we probably deserved the win after the 80mins. However, you can't give an unbeaten side like Loughborough a 12-0 lead before you wake up.

After that we played well and looked good enough to win it. A few needless penalties gave them a chance to regain the lead with a few minutes remaining but even then a kick in front from 30m out to win it we should have taken it.

In the first semi-final, it was Northumbria who prevailed as they scored with the final play of the game to beat Cardiff 23-20. They will be up against Premier South A side Bristol after they eased past USW 29-0 at Coombe Dingle. USW will now turn their attention to a relegation play-off over the next few weeks as they look to stay in the top tier for another term.

That final between Northumbria and Bristol is set to take place in Sheffield next Wednesday.

All eight sides were set to be in action this week and Loughborough University’s 2nd XV added to their 1st XV’s success by securing the Premier North B crown after a 55-0 win over already relegated the University of St Andrews.

Loughborough have now won 12 of their 13 fixtures this season and have a 12 point lead over second placed Bishop Burton College with a game still to play. Their final match of the domestic season sees them take on St Andrews next week in the reserve fixture and they now know they will be playing the University of Nottingham in a play-off for a place in Premier North A next season.

Bishop Burton’s game with the University of Birmingham was postponed yesterday but the second placed side are gearing up for the BUCS Trophy final where they take on Hartpury 2nds next week.

Elsewhere, the University of Manchester took a huge leap towards safety as they edged out third placed Nottingham Trent 5-3 at home. Manchester are now three points clear of the bottom two with two games still left to play this season while Trent have finished the campaign third in the table after eight wins from 14 matches.

The final fixture in Premier North B was also postponed between the University of Worcester and Durham 2nds.

Durham 3rds’ promotion ambitions suffered a setback on Thursday as the league leaders were beaten 21-10 by fifth placed Newcastle 2nds. Durham are now 10 points clear after Leeds Beckett 2nds beat the University of Liverpool 45-5 to move second in the table. Both sides have played 12 games this season, but the University of Hull - who are 11 points off the top - have two games in hand over the front two after their match with Manchester Met was postponed,

And in the final game in Northern 1A, the University of York have been relegated for a second consecutive season after they lost 24-25 away at current Northern 1A champions the University of Sheffield. Sheffield now sit fifth in the table and are in action again on Saturday against Hull in their penultimate game of the season.

There was one game in Midlands 1A where champions Loughborough 3rds were handed a walkover against Harper Adams University College to finish 14 points clear at the top of the division. They will now be involved in the promotion play-off with the winner of Northern 1A for a place in Premier North B next season. As for Harper Adams, they have finished the season in fourth spot having won nine of their 14 games this term.

Table toppers Lancaster University weren’t in league action this week as they were involved in the Northern Conference Cup final where they were beaten 18-50 by Northern 2B side Sheffield Hallam. This was just the second defeat of the season for Lancaster who now turn their attention to promotion as they are in a very good position in Northern 2A.

Sheffield Hallam’s Sammy Graham: “I was very delighted with the win. I've been at Hallam for three years and haven't had the chance to be in a final before and to win yesterday justified the hard work that the boys have put in over the season.

“It's been an up and down season because we were banned for three games at the start of the year but we haven't let that affect us and we have played great for the majority of the season. We’re heading in the right direction leading into varsity.”

There was one fixture in this division though where UCLan’s faint promotion hopes are still alive as they comfortably beat the University of Chester 43-5. UCLan sit nine points behind Lancaster in third place with two games remaining of the season so it would take a catastrophic collapse from the league leaders for UCLan to win the league. As for Chester, this was just their third defeat of the season and they also have two games left of the campaign as they lie fourth in the table.

There was also just the one game in Midlands 2A where the University of Derby (Buxton) are still now safe from relegation after they suffered a heavy 7-57 defeat to Warwick 2nds. Derby are three points clear of bottom side Lincoln with one fixture remaining.

Derby host Nottingham 4ths next week while Lincoln welcome champions Nottingham Trent 2nds to Longdales Park. The win for Warwick takes them third in the table after four wins from nine games so far.