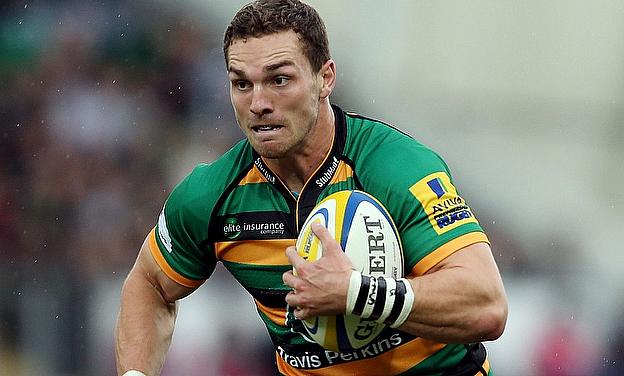 The Northampton wing hailed Welsh union and regional bosses for finally agreeing a "feasible option" that will boost chances of top stars remaining in the domestic game.

Flanker Dan Lydiate was the first to capitalise on the new central contracts and return from Racing Metro to the Ospreys.

North believes more top stars could follow suit - but stressed his current situation at Northampton suits him "down to the ground".

"Yeah, massively, the feeling is that people are relieved all around about the dual contracts I would say," said North.

"It's good to know there's finally actually a feasible option for the boys to come back if that's what they need.

"There was such uncertainty but now there is that option to come home, you can get the support of the regions and the union and they are working together rather than against each other.

"So that will benefit the regions and the union as well."

Wales and British and Irish Lions flanker Lydiate completed his move back to the Ospreys last week after forcing an early release from his contract at Paris club Racing.

Bosses from the Welsh Rugby Union (WRU) and Regional Rugby Wales (RRW) have ended years of in-fighting to increase their bargaining power by setting up the new dual-contract system.

The new set-up opens the door for the likes of centre Jamie Roberts to return to the Welsh regions, while North and Leicester fly-half Owen Williams will stay put in the Aviva Premiership.

"At the moment it's still in its early days of being organised.

"It's still in its infancy, but the more people that want it and take it up, the quicker it will get up to speed and everything will settle down.

"I still think it's not quite where it needs to be, but that's because it's all starting afresh and progressing.

"It's a good step in the right direction towards giving the union and the regions the chance of being competitive, in terms of deals."

North claimed a score and picked up a minor leg knock on his return after concussion as Northampton thumped Treviso 67-0 in European Champions Cup action last weekend.

The 22-year-old is now aiming for a return to Premiership action when the Saints host East Midlands rivals Leicester Tigers at Franklin's Gardens on Saturday.

Northampton release North for all his Wales commitments, a situation he admits allows him to gain the best of both worlds.

"I'm so happy to be at Northampton, they look after me personally, know the demands I'm under and we work together really well," said North, speaking on behalf of Land Rover, official vehicle partner of Premiership Rugby.

"Myself, the club and the union have a very good understanding of where each other are, where we need to go and together it's formed one of the best relationships I've ever worked in from a rugby point of view.

"For me the situation I'm in suits me down to the ground: I'm getting top-level rugby in Europe and the Premiership, then I'm also able to play for my country if I'm selected."

:: George North is a Land Rover ambassador. Keep up to date with the latest Land Rover rugby activity by following @LandRoverRugby on Twitter.