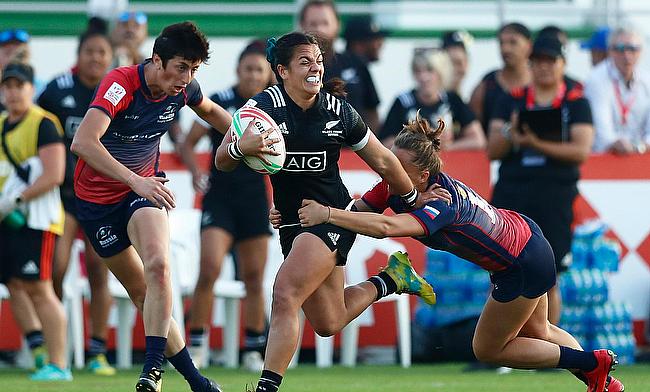 New Zealand, England and Canada had a productive start to the Women's HSBC World Rugby Sevens series in Dubai after managing to top their respective pools.

The three teams along with Russia, USA, France, Australia and Ireland have progressed to the knock-out stage of the tournament which will come to a conclusion on Friday.

New Zealand 7s showed domination from the start as they came up with a six-try performance against Kenya to begin their campaign with a 34-7 victory following which Sarah Gross and Stacey Waaka score a double against Russia to beat them 29-12 before managing to hold on Ireland with a 24-17 triumph that saw them claim the top place.

Ireland were more or less confirmed of their top eight berth following 26-0 and 27-12 wins over Russia and Kenya respectively but had to end second with seven points. Russia managed a third place finish with their win over Kenya and it proved decisive as they finished as the second best third positioned team overall to make it to quarter-finals.

England began their campaign beating rivals Australia 12-26 but the real test for them came against USA where they managed to edge them out 12-14. Both teams went into the break 7-7 with Cheta Emba and Abigail Brown scoring tries apiece for both the sides. Naya Tapper with an unconverted try got USA into lead but in the 14th minute Naya Tapper crossover proved vital giving chance for Natasha Hunt to slot the extras as England completed a two point win. With two victories from as many games England were front-runners in the group while a 38-0 win over China sealed them the top spot.

Even though USA had a tough game against England, their wins over China and Australia proved enough for them to finish second in the group. But the group also had a third team progressing to the knock out stage with Australia finishing as the best third finishing team overall.

Canada and France were the best teams on display in Pool C with wins in their respective games against Fiji and Spain. Though it was tries from Brittany Benn, Kaili Lukan and Charity Williams proved decisive as Canada defeated France 21-14 to take the top spot. Fiji though narrowly missed the top eight race as they had inferior point difference compared to Russia and Australia.