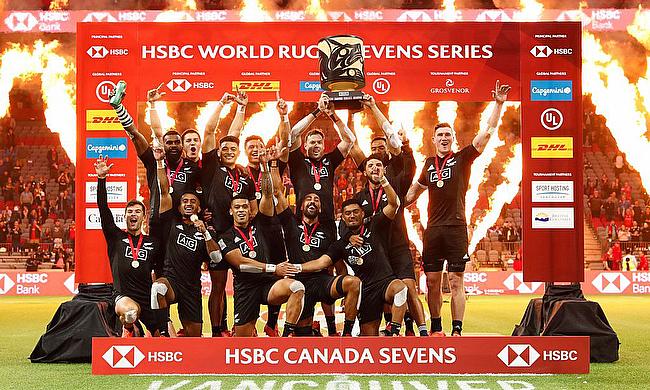 Joe Ravouvou scored a double as New Zealand came from behind to beat Australia 17-14 in the final of the Vancouver leg in the Men's World Rugby Sevens Series.

Lachie Anderson started the proceedings with an early third minute try for Australia that was converted by Lewis Holland as they raced to a seven-point lead before Joe Ravouvou led New Zealand's response with a seventh minute touchdown.

Maurice Longbottom helped Australia double the tally as he dotted down in the eighth minute and Holland was once again spot on with the conversion to ensure the teams went into the break with a 7-14 scoreline.

As Australia failed to score a point in the second half, New Zealand had a dominant opening with Andrew Knewstubb and Ravouvou crossing over to seal a thrilling three-point win.

Earlier, New Zealand finished at the top of Pool C with three straight wins while Australia, Canada and South Africa topped the remaining groups undefeated in the opening round.

New Zealand went on to beat Fiji 17-5 in the quarter final before outplaying South Africa in the semi-final to reach the top two while Australia defeated England and Canada to reach the final.

Canada went on to win the bronze with a 26-19 win over South Africa counterparts.

This is New Zealand's third title win in six legs as they occupy the pole position in the table with 115 points while South Africa are at second with 104 points. Fiji, Australia and England occupy the next three spots with 83, 81 and 77 points respectively.

The teams will converge next in London on 23rd and 24th May..