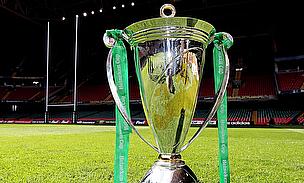 The new 20-team competition will repalce the Heineken Cup from next season with revenue distributed evenly between the Aviva Premiership, Top 14 and RaboDirect Pro12.

The top six clubs in England and France will qualify automatically along with seven sides from the Pro12 - the leading side from Italy, Ireland, Scotland and Wales and the three next best-placed teams.

For 2014-15, a play-off between the sides finishing in seventh place in England and France will determine the 20th team.

In 2015-16, the play-off for the final place will be expanded to include two more teams from the Pro12 or the winner of the second tier competition, the European Rugby Challenge Cup and one from the Pro12.

"It's good news for European rugby and takes the competition forward so that it's stronger in every way," Griffiths said.

"Anyone would look at the fact there's equal qualification from the three major leagues in Europe and say that's common sense. It's a fair deal on all sides and is a good compromise.

"This saga has always been about persuading people that it's not about one side getting one over another, it was always going to be win-win for everybody.

"That message has got through and we've now got this compromise that works well for everybody."

"The news is a massive positive for club rugby across Europe," he commented.

"With four less teams and meritocratic qualification the quality and integrity of the Champions Cup will increase and we believe this will have many positive effects in a number of areas.

"Rugby cannot rest on its laurels if it wants to grow, and I'm sure that in a few years we'll look back at this moment as the start of a new era for the sport."

And Regional Rugby Wales, which represents the four Welsh regions - the Scarlets, Cardiff Blues, Ospreys and Newport Gwent Dragons, is also fully behind the new structure.

"The regions are pleased that after giving their support to the Rugby Champions Cup last October, a new European platform has now been secured based on a strong core principle of equal distribution by participating clubs," read an RRW statement.

"We can all now look forward to a more developed, competitive and high quality European competition next season."