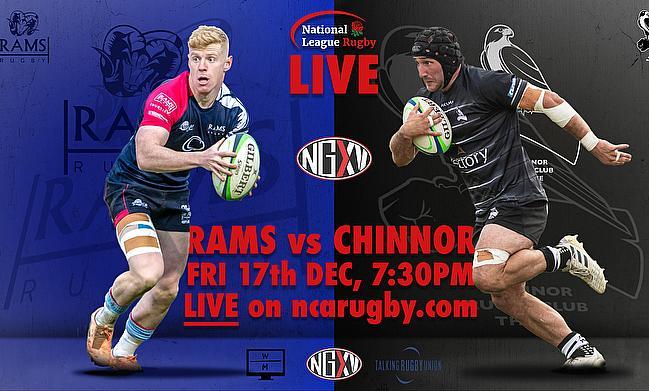 Title hopes dominate Round 14’s agenda in the National Leagues
Plymouth lift themselves out of bottom three, Fylde halt Stour and Clifton fight back to beat Worthing
First weekend of December to set the tone in run up to Christmas
Promotion battles blown wide open as Storm Arwen hits the National Leagues

Talking Rugby Union will be playing a major role in the live streaming of Rams RFC against Chinnor on Friday 17th December in National One.

This initiative is being powered by NextGenXV, who are experts in the field of live streaming and they currently lead the way when it comes to covering Schools Rugby.

Like National League Rugby, they are keen to break new ground and the match will also be shown across their own website and social media platforms.

The support from NextGenXV, Rams RFC - in particular CEO Gary Reynolds - and Chinnor has helped make this idea a reality and as TRU, we are excited to continue increasing the profile of National League Rugby.

The buzz which has been generated by The National League Rugby Review Show has also accelerated the process of taking the coverage to the next level.

Whilst the live stream will be broadcast from Rams RFC on the 17th, Warren Muggleton will still be hot-footing it to Worthing Raiders to present the Review Show which will be available on the 19th of December.

"I want to congratulate you on the Review Show. It is a great concept and it is always a pleasure to watch National League Rugby."

Alongside our live stream announcement, don't forget to subscribe to the Review Show! ?? https://t.co/UnmXIYjmgO pic.twitter.com/b7wSg5BsXO

We are also pleased to see TRU represented in the line-up of presenters, pundits and commentators for the live stream as National League Rugby sets to end 2021 in style.

The aforementioned Warren Muggleton will be the main face of the broadcast alongside leading freelance rugby journalist and TRU's very own Joe Harvey, while their special guest pundit is the highly-rated Leeds Beckett University second-row John Okafor.

NextGenxv's co-founder and main commentator Angus Savage will call the action under the lights at Old Bath Road with Talking Rugby Union's Chris Heal conducting interviews from pitchside throughout the evening.

Additional details about the coverage, including a link to the live stream itself, will be announced in due course.

Subscribe now to take advantage of our £6 Christmas deal!