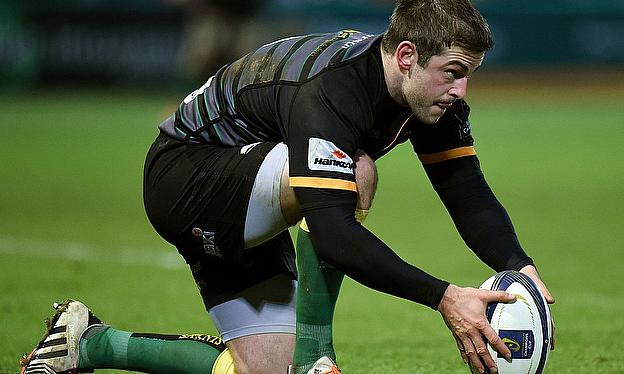 In front of a sold-out stadium, Newcastle also picked up a bonus point as they scored four tries through Chris Harris, George McGuigan, Alex Tait and Richard Mayhew.

Northampton were also awarded a penalty try as they extended their lead at the top of the table to six points over Bath, their nearest challengers.

Only Paul Grayson, who signed Myler from rugby league's Salford Reds in 2006, has scored more points than the current fly-half.

Myler opened the scoring with a penalty on 10 minutes and score his try six minutes later following excellent work from George North and Pisi.

He converted to hand Northampton an early 10-0 lead, only for Newcastle to hit back.

Five minutes later number eight Mark Wilson burst through tackles before Tom Catterick's grubber kick was dotted down by Harris in the corner.

Catterick landed the difficult conversion and then followed up with a penalty to level the scores at 10-10 on 29 minutes.

Pisi then restored Northampton's lead five minutes before the break as he made good on a break by North and a grubber kick by Myler, who added the extras to make it 17-10 at half-time.

A scrum penalty gave Myler the opportunity to add three more points early in the second half, which he took and Josh Forno was then sin-binned on 48 minutes for killing the ball.

From the ensuing lineout, Manu Samoa dropped the ball in the tackle but Northampton regrouped to score through Clark, who was sent in by Pisi and Ben Foden.

Clark looked set for a second try only for Newcastle to illegally bring down a line-out drive, after which referee Ian Tempest awarded the home side a penalty try.

That sealed the bonus point and Myler converted to reach 2,000 points, leaving the field to a standing ovation when he was subsequently substituted.

It looked all over at 32-10 but Newcastle were allowed to get back into the game with McGuigan scoring off the back of a line-out and Harris fending off Burrell to set up Tait to score. Catterick converted both to make it 32-24.

Burrell atoned for his error to touch down soon after and the scoring was complete when Newcastle earned their bonus point through Mayhew.