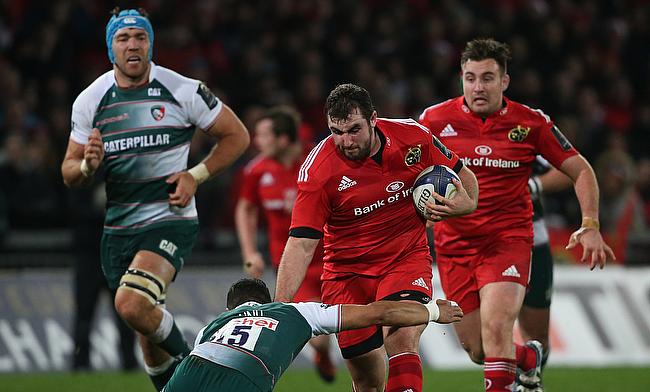 James Cronin (right) has been suspended for one month
©PA

Ireland and Munster prop James Cronin has been handed a one-month suspension following an anti-doping violation.

Cronin was tested following Munster's 21-21 Champions Cup draw against Racing 92 in November with the samples testing positive for prednisolone and prednisone.

The case was referred to independent judicial officer Antony Davies who stated that the act of the 29-year-old was unintentional as it was a dispensing error made by the pharmacy. As a result, Cronin was handed a one-month ban between 16th April and 15th May.

"Prior to the match against Racing 92, Cronin had been unwell and had been prescribed antibiotics, however, the pharmacy dispensed medication to him which was intended for another customer," said independent judicial officer Davies.

"The judicial officer accepted evidence that the banned substances in the player's sample were due to a dispensing error by the pharmacy and that the anti-doping violation was entirely unintentional.

"Although the judicial officer found that there was no significant fault on behalf of the player, and that there were clear and compelling mitigating factors, he determined that the player had to bear some responsibility for what was in his sample."

Cronin, who played three Tests for Ireland between 2014 and 2016 expressed hope that the issue will not tarnish his reputation.

"These past few months have been very trying for me and my family and I am glad that this issue has been resolved so that I can focus fully on rugby when it resumes," Cronin said.

"I accept that this is a strict liability offence and that even though the medication taken was due to a very serious and unexpected dispensing error, it has taught me a very valuable lesson that I hope my fellow players and other athletes can also learn from.

"I am confident that my friends, fellow players, the rugby media and rugby public will understand that I never acted with any intent nor in any manner to intentionally compromise EPCR tournament rules."