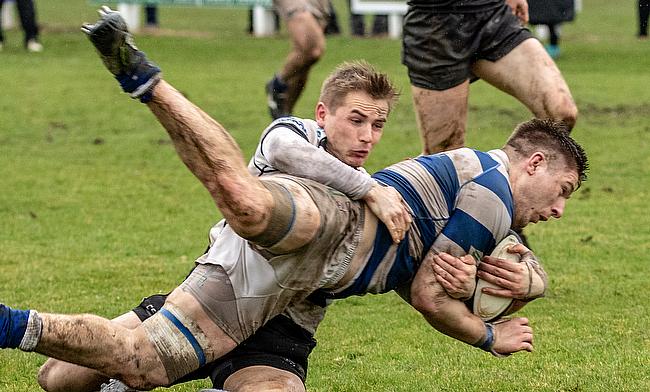 With the National Two North season heading towards a thrilling climax, Round 29 is set to deliver fireworks at both ends of the table.

At the top, Sale FC can take another historic step towards promotion to National One when they host Huddersfield this weekend while second placed Sedgley Park will be aiming to keep the pressure on the league leaders and nail down a top two finish when they entertain Sheffield.

In terms of Sheffield, they have to avoid defeat at Park Lane this weekend otherwise they will be relegated from National Two North. The Yorkshire outfit are 13 points adrift of safety and the odds seem to be stacked against them to stay in this division.

Sticking with the battle at the bottom, Luctonians and Wharfedale will both be desperate for victories this weekend with the Lucs aiming to build on their win over Macclesfield when they travel to Otley while Dale face a tough trip to third placed Tynedale.

Meanwhile, Blaydon sit in 13th place in National Two North and after three very positive displays over the last month, the Crows are now three points clear of the drop. A victory away at South Leicester in Round 29 would keep them in control of their own fate and edge them closer to securing their status in this division.

This weekend, Sale FC will play their final home game of the season when they welcome Huddersfield to Heywood Road, but will their next fixture on their own turf be in National One? Well, their recent performances have kept them on course for the National Two North title and it has been their displays over the last few weeks which can define champions. Hard fought wins over Macclesfield and Wharfedale followed by stunning comebacks against Chester and Blaydon have shown the character of this Sale side and with three games to go in their season, they are still in control of their own fate.

Super Saturday is two days away! Pre-Match Lunches are sold out! it's family day and we're going for a our 21st win of the season and clean sweep at Heywood Rd. et down early and join in the fun as it comes down to the wire. #nat2n #onesalefc #rugby @SaleSharksSC @CheshireRFUNews pic.twitter.com/BzzhnHsVEl

Jonathan Keep’s side are one point clear at the top, but they do have a game in hand over second placed Sedgley Park. Sale can clinch promotion this weekend if they secure their 15th consecutive home win and Sedge fail to pick up a point against Sheffield, but on paper, you'd expect the title race to go down to the final weekend. However, Huddersfield will provide a stern test for Sale in Round 29 as the Yorkshire club continue to target a top six finish. Field bounced back from a mauling against Sedgely Park to beat Sheffield Tigers last weekend and with four wins from their last five games, you wouldn’t bet against Gareth Lewis’ side ending the campaign in sixth place to cap off a superb first season back at this level.

Another victory and another 40 plus points scored by Sedgley Park in Round 28 as they brushed aside Leicester Lions to move ever closer to a top two finish. Matt Bebbington’s side have shown a cutting edge since the turn of the year and 12 wins from their last 13 matches highlights that point. Sedge have continued to crank up the heat on league leaders Sale FC, but with the destiny of the title out of their hands, their focus will be securing a minimum of a play-off spot when they host Sheffield this weekend.

A win of any kind for Sedge would secure a place in the top two and the odds are in their favour as Sheffield travel to the north-west needing to avoid defeat if they are to stay in this division for at least another week. As things stand, Adam Byron’s men are 13 points from safety with three games in their season to go and a loss at Park Lane would mean an immediate return to the fifth tier. One victory from their last six matches has led them to this position and considering Sedge have won 12 of their 13 games at home this term, it could be curtains for Sheffield this Saturday.

A last-gasp defeat at Stourbridge in Round 28 has all but ended Tynedale’s hopes of finishing in the play-off position this term. A run of five straight wins had brought them right back into contention for a place in the top two, but their loss last weekend in the Midlands means Tyne are now 12 points behind Sedgley Park. If they were to sneak into second spot, it would take an almighty collapse from Sedge but all Scott Lawson’s side can do is bounce back and return to winning ways when they host Wharfedale this Saturday.

Regardless of where they finish, this has still been an excellent campaign for the north-east outfit and visitors Wharfedale will be hoping to face Tyne next season as they continue to battle for survival in National Two North. Things aren’t looking rosy for Dale, but hooker Dan Stockdale told us this week that his side still believe they can get themselves out of trouble. The Yorkshire club are three points off safety with two games to go, but if results go against them this weekend, they could be relegated just two seasons after coming down from National One. However, Wharfedale’s excellent victory over Hinckley last weekend would have boosted confidence and a fourth triumph on the road will keep their survival hopes alive.

Stourbridge left it late, but their victory over Tynedale last weekend saw the Midlands club pick up their second win from their last three matches which is the sort of form Stour will want to maintain as we approach the climax of the campaign. After three defeats on the bounce between February and March ended their promotion hopes, the best Stour can hope for is a top four finish after another strong term and victory away at Macclesfield would edge them closer to that goal.

Neil Mitchell’s side have already begun planning for next season and after securing their status in this division two weeks ago, Macclesfield will also have one eye on the 2018/19 campaign as we near the end of this current term. The Blues’ turnaround since the appointment of interim coach Marshall Gadd has guided them from relegation candidates to a potential top eight side, but they will be eager for a reaction at Priory Park this weekend after a defeat to strugglers Luctonians last time out.

Hinckley’s website described their loss to Wharfedale in Round 28 as ‘lacklustre’ as the Hornets fell to their largest defeat of the season. George Chuter’s men are limping towards the finish line after a campaign which had promised so much. At Christmas, Hinckley were well in the mix for a top two spot in this division, but inconsistent form hampered their chances. However, this has still been a very positive season for a Hinckley side that were promoted into this division in 2016 and the Midlands club will be hoping to build some momentum heading into next year by securing victories in their final three matches.

First up for Hinckley is the visit of Chester, a side who have their sights on a top six finish. The Cheshire outfit have their fate in their own hands after their match with South Leicester was postponed last week and with three games left in their campaign, they sit five points off sixth placed Huddersfield. While Hinckley have struggled since the turn of the year, Chester have flourished having won seven of their 11 matches and another triumph could see them move back into the top six this weekend.

South Leicester will come into their final home game feeling refreshed after their fixture with Chester was called off last weekend. The Midlands club are still targeting a top eight finish and as things stand, they sit just one point outside the top half of the table. Following a run of six successive defeats across January and February, two wins from their last four games has reignited their campaign and another top half finish is still certainly within their reach.

Shame about the result but what a great day for Blaydon with all mini sections enjoying games on the Falcons 1st xv then Blaydon 1st team narrowly going down to table topping Sale. Thank you for the tremendous support and hope to see you all again on April 28th vs Hinckley. pic.twitter.com/xvI96cJnsJ

While a couple of wins have sparked South back into life, the same can be said for Blaydon. Back to back victories against Luctonians and Sheffield Tigers lifted Matt Thompson’s side out of the relegation places and a brilliant performance in defeat against Sale FC last weekend saw them pick up another bonus-point to leave their fate in their own hands. Currently, the Crows sit three points above the drop and they can confirm their status in this division this weekend if they beat South Leicester and other results involving Wharfedale and Luctonians go their way. It has been a brilliant revival from Blaydon up to now and their mission can take another step towards completion in Round 29.

Last week, Otley secured their status in this division for another campaign as they came from behind to beat Sheffield at Abbeydale Road. Director of Rugby Peter Clegg targeted two wins from their final five games to guarantee their safety and the Yorkshire club have delivered. Planning has already begun for next season with the men from Cross Green announcing a signing earlier this week and Otley will be keen to continue ending this term on the front with their next task being a home clash with relegation threatened Luctonians.

Defeats to Blaydon and Tynedale looked to have killed off any hopes of survival for Luctonians, but Ryan Watkins’ side are still fighting after an excellent home win against Macclesfield last time out. With four games left in their season to play, the Lucs are 12 points off safety and they could be relegated if Blaydon beat South Leicester and they fail to get the desired result against Otley. The Herefordshire side have shown real character in their most recent wins against Macc and Hinckley and they will need to display that once again if they are to continue their survival challenge.

Leicester Lions’ trip to Sheffield Tigers this weekend does have an ‘end of season’ feel about it, but both sides will be keen to complete this campaign on a positive note after an inconsistent year. For the Lions, they have struggled to replicate their top three finish of last term and that saw Jack Heald leave his post and former coach Andy Key re-join the club.

Since Key’s arrival back in the Midlands, he has tried to steady the ship but mathematically, Leicester are still not safe. Four straight defeats leaves them 10 points clear of the drop zone, but just two points from their trip to Dore Moor would guarantee their spot in this division for next season. As for the hosts, they sit one place and two points behind the Lions so a first win in four for Jamie Broadley’s side would seal their spot in National Two North for the second year on the trot as the Tigers look to establish themselves at this level.