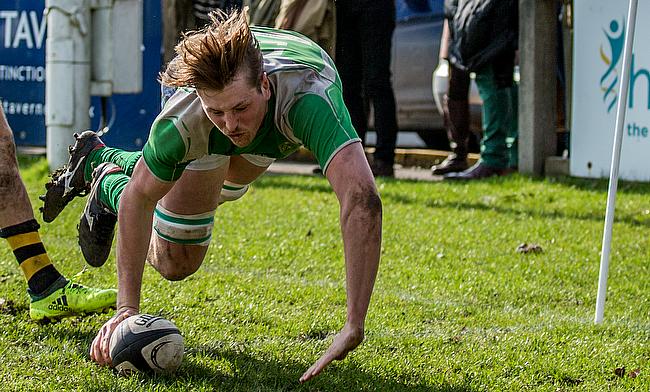 Wharfedale put six tries past Hinckley in Round 28 to seal a crucial victory which leaves them three points off safety in National Two North.

Dale’s win at the Avenue was their first for just over a month and with Blaydon losing to league leaders Sale FC, the battle for survival has taken another twist.

Sale’s triumph against Blaydon was not easy as the table toppers produced a stunning comeback to remain a point clear at the summit while second placed Sedgley Park racked up a half century of points to seal a win over Leicester Lions.

Elsewhere, Luctonians’ survival hopes are still alive after a vital win at home against Macclesfield, but the same can’t be said for Sheffield who are now teetering on the edge of relegation following their loss to Otley. Chester v South Leicester was postponed.

Sale FC remain in control of their own destiny as a battling win over Blaydon kept them on course for the National Two North title.

Jonathan Keep’s side have won 20 matches in a row, but this was far from straightforward as they scored 24 unanswered points in the final 15 minutes to secure the victory against a Blaydon side who are still fighting to stay in this division.

FT @BlaydonRFC 24 @SaleFC 36 a fantastic game of rugby with the hosts belying their league position with a superb performance that almost derailed the blue and whites promotion charge. Unbelievable comeback though #blaydonvsale #honthedogs

The hosts put in arguably their best performance of this season and they led 17-5 at the break with Dan Marshall, Nathan Bailey and James Cooney all crossing, while Tom Ailes replied for Sale.

John Blanchard got Sale off to the perfect start after the interval as he scored their second try of the afternoon, but Blaydon tightened their control when Harry Borthwick darted over.

However, Kingston Park was treated to a second comeback in less than 24 hours as Sale FC finally showed their quality. Dan Birchall, Ailes and Matt Simpson all went over to complete a remarkable recovery by the league leaders.

Sedgley Park edged closer to securing a top two finish in National Two North as another clinical display helped them see off the challenge of Leicester Lions in the Midlands.

Tries from Andy Riley, Jamie Harrison and Sam Lowthion put Sedge  ahead, but they only led by two points at the break as scores from Joseph Newton-Taylor and Tom Aviss kept Leicester Lions in this contest.

The hosts were in front after the interval thanks to Luke Veebel’s score, but Sedge then went through the gears as Max Skofic, Matt Riley and Dan Maher all touched down to ultimately seal a seventh win in a row for Matt Bebbington’s side.

Alex Smit replied for Leicester Lions on 78 minutes, but a Matt Riley penalty wrapped up another victory for Sedge which leaves them 12 points clear of third placed Tynedale and a single point off leaders Sale FC.

Tynedale’s play-off ambitions suffered a setback as a late penalty from Rod Petty secured a welcome victory for Stourbridge at Stourton Park.

Tyne led through tries from Joe Mills, David Batey, James Spencer and Aedan Moloney, but scores via Jack Lea and Niall Gibbons kept the lead down to just two points.

It was first blood to Stour after the break as Petty crossed before he nudged over a penalty to make it 32-22 to the hosts.

However, Tynedale fought back thanks to two quick-fire tries from Oliver Walker, but Petty was on hand in the dying embers of this encounter to snatch the win for Stour.

Wharfedale picked up their first win in five games as they ran in six tries to beat Hinckley to keep their survival hopes alive.

An impressive Dale side outclassed the visitors and led 17-12 at the break thanks to a score from Kieran Frost and a penalty try.

Thanks, good luck for the rest of the year and we hope to be visiting you again next year as well - a wonderful club. Well player today, and congratulations on a well deserved win https://t.co/h693b5Uc4y

The aforementioned Frost went over for his second score shortly after the restart and Phil Woodhead, Oli Cicognini and Tom Barrett added further tries as Dale raced away.

Hinckley’s tries came from Joe Glover, Joe Wilson and Gary Turner, but after a solid win over Stourbridge last week; this was another step back for the Midlands club.

The victory for Wharfedale leaves them three points from safety with two matches left in their season.

The lock touched down to open the scoring and it sparked a scintillating first 20 minutes for Field who took the game away from their visitors.

A penalty try was swiftly followed by scores from Tom Owen and Ben Morrill before Thompson grabbed his second to help Huddersfield into a 31-0 half-time lead.

Sheffield Tigers produced a spirted display after the break as scores from Jamie Broadley and Tom Coates got them on the board, but the damage had been done in the first period.

Luctonians’ bid for survival continued as they secured back to back home wins by beating Macclesfied at Mortimer Park,

In an entertaining match, Ryan Watkins’ side were trailing 5-3 at the break as James Hampson’s try was the only score of the first period.

Lucs, who replied on the stroke of half-time via a Sam Boxhall penalty, went ahead after the restart as the scrum-half landed two more kicks.

Heading into the final quarter, Macc went back in front as Lewis Barker touched down, but there was to be more late drama in Herefordshire.

Boxhall was once again accurate from tee before Frank Kelly sent Charlie Meredith into the corner to clinch the win for Luctonians who are now 12 points from safety with four games remaining in their campaign.

Sheffield’s survival hopes suffered a major blow as they were beaten by Otley at Abbeydale Road.

Adam Byron’s side are now 13 points adrift of safety with three games to go in their season and with second placed Sedgley Park to come next week, the odds seem to be stacked against the Yorkshire side.

The hosts had led this contest 12-10 at the break following tries from Fergus Wood and Jonny France, but after their second half fightback against Leicester Lions last week, Sheffield were on the wrong end of a revival in Round 28.

Paul Petchy and crossed in the first period for Otley and Alex Beaumont’s score on 43 minutes proved decisive as the away side held out for the win.