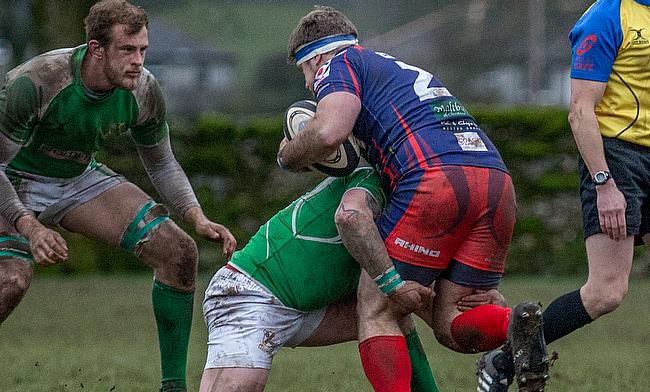 Chester put in a strong display in Round 27
©John Burridge

Sale FC stayed at the summit of National Two North after a gritty and determined victory over Chester at Heywood Road.

The league leaders have won 19 games on the bounce, but that record was put to the test by an impressive Chester outfit in Round 27.

Victory for Sale leaves them one point clear at the top, but they do have a game in hand over second placed Sedgley Park who produced a superb display to beat Huddersfield.

Third placed Tynedale kept the pressure on after a win against Luctonians while Hinckley and Macclesfield picked up home triumphs against Stourbridge and Otley respectively.

Down at the bottom, Blaydon moved closer to securing their status in National Two North after a win over Sheffield Tigers while Sheffield are still fighting following their victory at Leicester Lions.

There were contrasting fortunes for rivals Wharfedale as they suffered a defeat away at South Leicester leaving them seven points adrift of safety.

Sale FC survived a scare against Chester as the league leaders battled to their 19th victory in a row to stay on track for automatic promotion.

A late penalty by Chris Johnson settled the issue after Chester had led by seven points at the break.

Dan Birch scored Sale’s only try of the first half while Ross White (2) and Mike Craven notched Chester’s tries.

Some game at Heywood Road today. Hats of to @ChesterRUFC who were superb & could so easily have gone away with more than the 2 deserved bonus points. But massive congrats to the @SaleFC dogs for hanging on in there and getting over the line to stay top #onesalefc #nineteeninarow

Chester did leave Heywood Road with two points thanks to a score from Craig Ross, but this was a huge test for Sale which they were able to overcome.

Sedgley Park have moved to within a point of National Two North leaders Sale FC thanks to an impressive win over Huddersfield.

Matt Bebbington’s side had too much for their visitors as they scored seven tries to further consolidate their place in the top two.

Huddersfield’s best moment of the game came towards the end of this contest when Lewis Workman crossed to add to Joel Hinchliffe’s first half penalty, but this was another clinical display from Sedge.

Tynedale overturned a half-time deficit to keep their hopes of a top two finish alive and condemn Luctonians to another defeat which has dented their survival chances.

The Lucs did hold the advantage at half-time as Jordan Page and Tom Jones both crossed, while Jake Rodgers and Ash Smith landed penalties for Tyne.

However, three tries in 20 minutes from the hosts turned the game around. Joe Mills, Scott Powell and Tom Bramwell all crossed to secure Scott Lawson’s men their fifth win in a row.

As for Luctonians, they are now 15 points from safety with two games in hand.

Hinckley picked up an excellent and much needed victory as they brushed aside Stourbridge in a surprisingly one-sided fixture at Leicester Road.

Stourbridge are now one point clear of Hinckley in fourth place, but after a tough couple of weeks, Neil Mitchell’s side couldn’t produce a performance against their Midlands counterparts.

Hinckley led 12-0 at the break courtesy of Ben Marshall and Dave Peck before two tries in seven minutes from Mitch Lamb and Joe Glover secured the Hornets’ first win since the end of February.

Macclesfield moved into the top half of the National Two North standings as they survived a fight back from Otley to seal victory at Priory Park.

The hosts led 21-0 thanks to tries from Joe Palmer, Sam Moss and David Marwick, but Tom O’Donnell’s score helped Otley go into the break with something to work with.

The visitors were able to cut Macc’s lead further after the restart as Tom Hodson crossed out wide, but the home side restored their 14-point advantage when Frank Barker darted over.

Otley continued to battle and Paul Petchy’s try set-up an intriguing last 10 minutes, but Macc held on for the victory.

Wharfedale’s hopes of avoiding relegation suffered another setback as they were beaten by South Leicester at Welford Road.

Tries from Corey Venus and Matt Cooke made it 14-11 on 30 minutes after the visitors had opened the scoring via Oli Cicognini.

But South stretched clear with a Myles Bean converted try to give them a 10-point lead at the break.

After half-time, Rickie Aley added two penalties for South either side of a consolation score from Dale’s Toms Asejevs.

The result for Wharfedale leaves them seven points adrift of safety with three games remaining.

Sheffield have given themselves a glimmer of hope that they can pull off a remarkable escape from relegation after a gutsy victory over Leicester Lions.

The win for the Yorkshire side leaves them 13 points from safety with four games left in their season still to play.

Sheffield’s scores came either side of the break as Jon France and then Rupert Broadley touched down to make it 17-15 to Leicester Lions at the start of the second period.

Tannie Finn and Ollie Tapscott had helped the Lions into a 17-point lead, but Sheffield hit back after the interval and penalties from Stephen Depledge and Will Hodgson clinched victory for Adam Byron’s side.

Blaydon produced another vital performance as victory over Sheffield Tigers has moved them seven points clear of the relegation places.

The visitors went 31-14 up at the break with Rob Lenderyou, Keith Laughlin, Dan Marshall and Nathan Bailey all going over.

Beers in changing rooms for 1s, great defence 2nd half Bricks have no voices left cheering the lads on https://t.co/Css7oTiRfY

A penalty try and a score from Tom Hart kept Sheffield Tigers alive in this contest and they hit back after half-time to cut Blaydon’s lead to just five points when Tom Farrell and Jamie Broadley both crossed.

However, Blaydon’s win was sealed when the ever reliable Tom Catterick landed a penalty late on as Blaydon took a step closer towards survival.