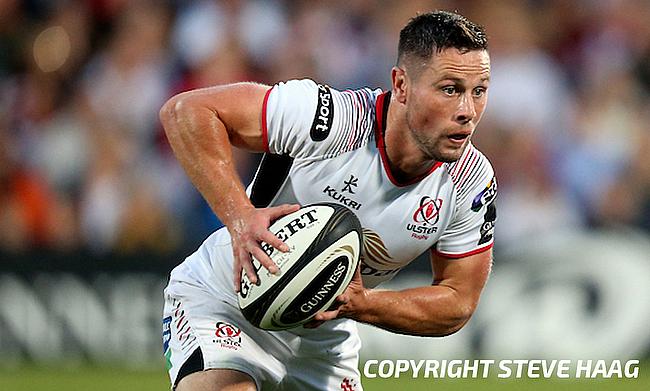 John Cooney was part of the winning Ulster side
©Steve Haag

Ulster managed to overcome yellow cards to Kieran Treadwell and Matt Faddes as they edged out Scarlets 26-24 in the seventh round of Pro14 at Kingspan Stadium.

This is Ulster's seventh win from as many games as they are at second place in Conference A while Scarlets despite the defeat are second in Conference B.

Ulster suffered an early setback as Luke Marshall left the field in the fourth minute with a knee injury but they were the first to open the score with Rob Lyttle collecting a pass from Faddes to dot down in the seventh minute.

In the 17th minute, Ulster lost Treadwell to sin-bin for a high tackle on Javan Sebastian and immediately Scarlets made use of the numerical advantage with Paul Asquith's touching down and Angus O'Brien followed with the conversion making the scoreline 5-7.

As Ulster returned to full strength, Stewart Moore collected an inside pass to dot down in the 31st minute and Sean Reidy followed the suit at the stroke of half-time. Cooney kicked both the conversions as the opening half ended with a 19-7 scoreline.

Scarlets were the quickest to get off the block in the second half with Steff Evans crossfield kick was collected by Ryan Conbeer on his way over the line to make it 19-12 and their momentum took a boost after Faddes was yellow-carded in the 47th minute for a high tackle.

As Evans capitalised on a pass from Tyler Morgan to score, the gap came down to two points but Ulster regained control with Treadwell's try in the 65th minute that Bill Johnston improved. Phil Price with his try in the closing stage provided Scarlets some hope but Ulster did well to complete a two-point victory.