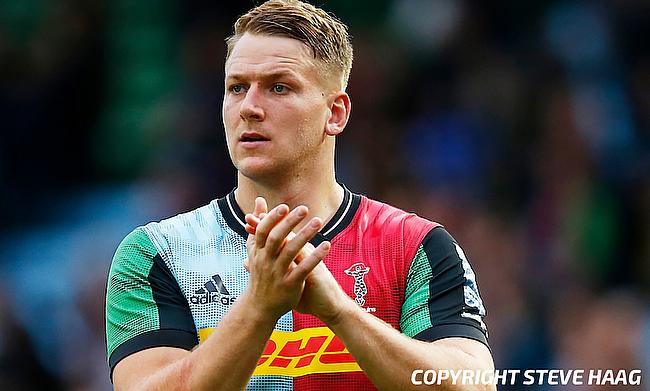 Alex Dombrandt led from the front with a hat-trick as Harlequins edged out Castres Olympique 36-33 in the fourth round of the Heineken Champions Cup at Twickenham Stoop on Friday.

This is fourth win for the Quins in as many games as they finished the group stage second behind Leicester Tigers while Castres are at 10th after losing all the four matches. The Quins will now have to wait for the weekend matches to find out their opponent in the round of 16.

Castres were given an opportunity early as Harlequins strayed offside and Ben Botica kicked a penalty goal in the opening minute to start the proceedings. Skipper Gaetan Barlot extended the visitors lead as he sneaked at the back of a line out to touchdown but the conversion from Botica went wide.

Clermont looked threatening as Antoine Zeghdar cruised over after another slick set-piece move but once again Botica missed out on conversion as they stretched their lead to 0-13.

The first response from the Quins came in the 13th minute when Dombrandt dotted down after good work from winger Cadan Murley but Botica finally got his stride right as he extended Castres lead to 5-16 at the end of an dominating opening quarter for the French side.

Harlequins showed better resilience Huw Jones pounced on a loose ball to score in the 22nd minute and flanker Viliami Taulani followed the suit five minutes later at the back of a rolling maul and Tommaso Allan followed with the conversions on both the occasions making it 19-16.

Nevertheless their momentum was hampered by a sin-bin to Joe Marler in the 33rd minute for standing on the hand of Castres scrum-half Rory Kockott, who went over the line a minute later making it 19-23. However, with the break approaching Allan kicked a penalty goal as the Quins headed into the break trailing by one point.

Harlequins were the quickest to get off the block in the second half as Dombrandt gathered a kick from winger Louis Lynagh to score his second in the 42nd minute and Allan's conversion made it 29-23 but tries from Nakosi and Adrea Cocagi kept Castres in front with a four-point lead.

Just when the French side looked good for their first win of the season, Dombrandt had other plans as he squeezed through a host of defenders and dotted down to make it 34-33 before Marcus Smith landed the conversion to complete a three-point victory.