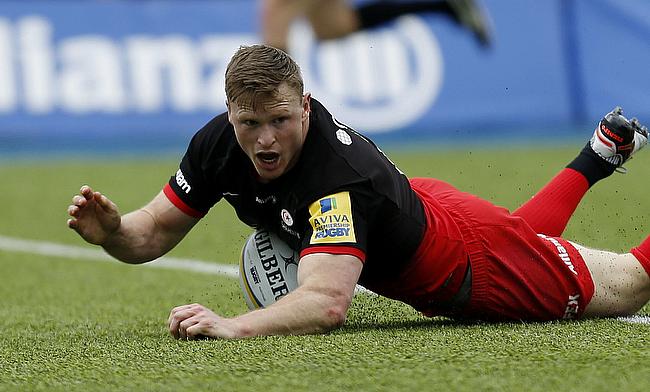 Saracens director of rugby Mark McCall believes Chris Ashton's decision to turn down the opportunity to play for England Saxons was an acceptable one.

Ashton has been in prolific form ever since his return from the 10-week ban scoring 10 tries from eight matches, but was still omitted from the England squad that will tour Australia with head coach Eddie Jones preferring Marland Yarde over him.

However, Jones offered the 29-year-old a lifeline to stage a comeback by selecting him for the England Saxons squad that will tour South Africa for a two-match series but the Saracens winger declined it considering his partner is due to give birth to their first child this summer.

Even though many, including former England captain Will Carling believes the decision to pull out might affect Ashton's chances of making a comeback in the senior squad, McCall insists the decision was made after consulting Jones.

"Obviously it was disappointing that Chris didn't get selected for Australia because he's done well for us since he's come back from his suspension," McCall said.

"Eddie showed him a little bit of understanding as well, same as he did in the Joe Marler case. As far as I know the decision was made in conjunction with Eddie.

"Chris went through a lot in that 10-week period and has played really well since he's come back.

"His wife is expecting and is due to give birth towards the end of June, so for all sorts of reasons Chris' head wouldn't have been in the right place, so it was probably best that he didn't go."

Saracens had a couple of injury woes with fly-half Owen Farrell sustaining a rib injury while centre Duncan Taylor was suffering from concussion following the play-off against Leicester last weekend.

However, McCall confirmed that both Farrell and Taylor are expected to be fit in time for the Premiership final on Saturday against Exeter.

"Owen's fine. He's got bit of an issue with his side and didn't train on Tuesday, but he'll be fine. He'll be training on Thursday," McCall said.

"Duncan Taylor took a bang to the head against Leicester and is doing his return to play protocols, but everything has gone according to plan so far and we expect him to train on Thursday as well."