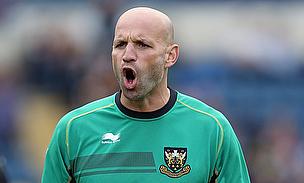 Northampton head coach Jim Mallinder has criticised his side's defence after they conceded four tries in their 39-31 Aviva Premiership win over Newcastle at Franklin's Gardens.

The Falcons departed with a bonus point as Chris Harris, George McGuigan, Alex Tait and Richard Mayhew all crossed the whitewash.

Northampton ran in five tries themselves to pick up a bonus point themselves and move six points clear at the top of the table.

However, despite tries from Stephen Myler, George Pisi, Calum Clark, Luther Burrell and a penalty try, Mallinder is concerned with a defence that looked vulnerable.

They struggled to deal with Newcastle having also leaked three tries against Harlequins last week.

"In attack there were moments of brilliance, we scored some good tries and could have had two or three more, so there was some very pleasing aspects to our attacking play, but our defence was very disappointing," said Mallinder.

"I think we have conceded more tries this last couple of weeks than we have all season, we need to sharpen up in that area. I think a lot of it is mental, we need to make sure we don't concede from first phase and from as many mauls as we did today.

"Credit to Newcastle they did it last week against Saracens and did it again this week and pushed us close. We have threats all over the field, we are playing pretty well, but not outstanding, so it is pleasing to take five points."

Mallinder paid tribute to fly-half Myler, whose 17 points on the night saw him pass 2,000 points for the club.

"He has been here longer than me and is still playing well and kicking goals," said Mallinder.

"To achieve that milestone is phenomenal. A lot of our good play is through Stephen, he doesn't get the headlines but he is the main man that our attacking play comes through."

Meanwhile, Newcastle director of rugby Dean Richards was delighted with the display from his young side, which is starting to show real improvement under attack coach Dave Walder.

"We have a great crop of youngsters coming through and they are holding their own in the top flight," said Richards.

"That pleases me greatly, the disappointing thing is conceding the field position to give them the tries a bit too easily, so we have got to tighten up in a few areas and then we will start winning a few more games."