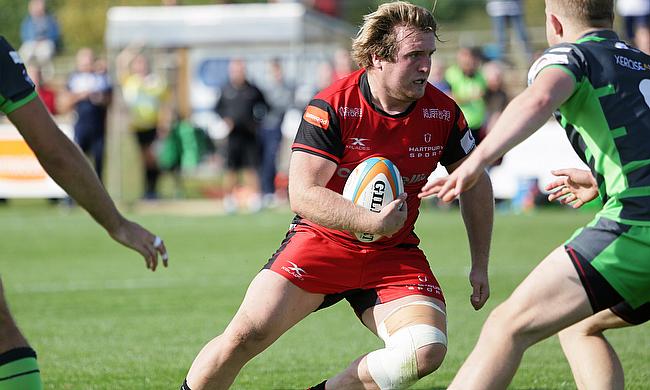 “We were just in the meeting room on Wednesday and James Dun walked in. He’s been with us a while, then Mitch Eadie – who was the guy we were going ‘oh my god’ about - and then (Nathan) Hughes has walked in,” Luke Stratford laughed.

“Everyone was just like ‘f***ing hell is this actually happening, what is going on?’. It was really cool to have him, he was a really nice guy, he added a lot and bought in really well to the culture in two days. It was really cool.”

When it was announced that former England international Nathan Hughes would be playing for Hartpury against London Scottish beneath the Friday night lights, social media went ballistic and the 30-year-old certainly lived up to expectation.

His performance at the Alpas Arena led to a Championship Clubs Podcast Team of the Week nod, with Hartpury coach John Barnes describing the Bristol Bears man as the team’s best player on the day.

Already, Hughes’ time in Gloucestershire has come to a close – now on loan at Bath – and for Hartpury, it is a return to normal and preparation for a trip to Bedford Blues this weekend. Placing ninth in the Championship last season, ‘Pury have climbed much higher this term, the side sitting fifth in the league table.

With a limited number of players contracted on a part-time basis, many of the club’s representatives come through Hartpury University and College’s partnership with top-flight club, Gloucester.

It is a relationship that was renewed between the two parties in early December, Gloucester’s junior academy and Allianz Premier 15s club, Gloucester-Hartpury, based at the education providers campus. The link is mutually beneficial - to put things mildly - with numerous players treading the path between Kingsholm and Hartpury.

Some of the current Gloucester players to have turned out for both sides, as well as be educated at Hartpury, are Jonny May, Lewis Ludlow, Jake Polledri, Alex Craig and Louis Rees-Zammit and in the summer, seven more Academy players were announced as joining the Championship outfit for the season.

Amongst that group, Toby Venner and Olly Adkins had won a BUCS Super Rugby Championship final at Twickenham, whilst Joe Howard and Ethan Hunt had topped the AASE league with the U18s group.

Joining Hartpury in 2014, Stratford was part of the squad that gained promotion to the Championship a year later and gradually, he became a regular with the side once his studies were done.

Winning BUCS Super Rugby Championships in 2017 and 2018, the 27-year-old is clearly enthused about the partnership and the effect it has had on the university’s elite team.

“People really don’t understand the link at all from the outside,” Stratford said. “It is a very good link. They send us boys on loan and there are even Academy lads that play BUCS.

“I think the connection is probably at its strongest point right now. That’s only my opinion, but I feel like George Skivington (Gloucester’s Head Coach) has really pushed the connection and it’s profiting both sides, I think.

“We are not a big enough club to have 35 lads signed on full-time. I think we work really well with what we have got and knowing our strengths, and having a good 24-man squad, getting the lads from Gloucester really helps out.

“It is class at the moment, and to be fifth, it is something we never really thought of. Usually we were 11th or 10th, scrapping it out with Richmond or Rotherham (Titans) at the bottom. It has been a rough couple of years, but we have come out of it really strongly.”

Falling back in love with rugby

Like so many others, Stratford first came to the West Country as a student. Having begun his career with Jersey Reds in the Championship as a teenager, he played regular university rugby before graduating to the weekend side, playing in National One and the second division.

After five years, Stratford made the move to Clifton in National Two South and often starred for the Lavender and Blacks, a move that reignited his passion for the game after sitting on the sidelines for an extended period.

“I fell out of love with it (rugby) a bit,” Stratford, when asked about his move to Bristol, said. “When I went to uni, I was first choice the whole time. I was playing regular rugby, really enjoying it, we were winning most of our games in BUCS and we ended up winning two cups.

“It was really good and then I went to the RFC side and just sat on the bench. I was involved in all of the games. I think we had 26 games and I only ended up starting three of them. I was on the bench for the rest of them, didn’t come on a few times and just sat around.

“Everything went out of the window, and it was a case of saying ‘I’ll leave, try and enjoy my rugby again and see what happens’. I never expected to get back up (to the Championship) so quickly, or at all.

“I literally just wanted to enjoy it again and play rugby. That was the aim, just to enjoy it.”

Since his return, Stratford has often exchanged places with Will Crane in the starting hooker’s jersey, the pair well accustomed to one another thanks to their Wednesday afternoon outings in BUCS competition. 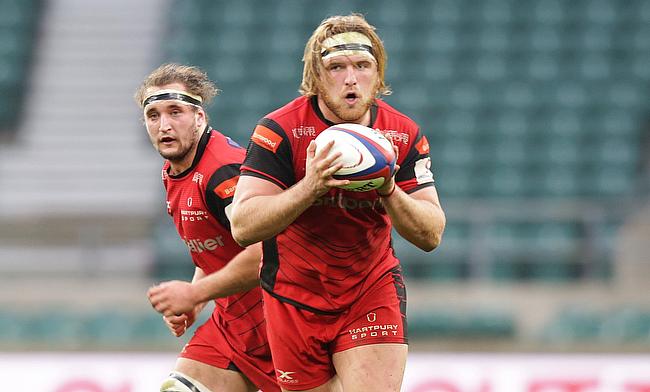 Along with the playing aspect of his return, Stratford is also coaching the Hartpury 2nds in the university leagues, as well as working at a school full-time and coaching local team, Longlevens RFC, in his spare time.

Drawn back into the ‘Hartpury bubble’ like so many are, the 27-year-old is hoping that by donning the whistle, he can contribute to the pathway that has served him, and many others, well over the years.

“It is almost like trying to give back to the uni,” Stratford said. “I am not the best coach ever, and I know the other coaches know that. It is trying to help out and almost trying to help keep the culture.

“I have been in the BUCS side, won trophies, now playing in RFC and I am now trying to show them this pathway of coming to uni, getting your degree, playing rugby in BUCS, then trying to play RFC, and from there move towards the coaching opportunities as well.

“Most of the coaches (at Hartpury) have all played at RFC level and gone on to coach there, so I think it is really nice to see that there are opportunities there after rugby and they do look after you.

“It is not like you come in and then they get rid of you to get someone else in. It is a really good vibe there.”

Living with the world's best

Over Christmas, Stratford got engaged. Now for most people, this would be a fairly run of the mill occurrence, but in the case of the 27-year-old, his fiancé is Zoe Aldcroft. As you might have expected, the pair met in the same corner of Gloucestershire where they now share a home field.

Aldcroft turns out for Gloucester-Hartpury and at the end of last year, she was named as World Rugby Women’s 15s Player of the Year. The award was announced in early December, just weeks after a series win over New Zealand, before back-to-back victories against Canada and USA.

Autumn was concluded with another highlight, Aldcroft was handed the captaincy for the game against the USA at Sixways. Scoring a try in that clash, the Player of the Year award capped off a fine season.

“She (Zoe) got nominated for Player of the Year over email and a week later she got it,” Stratford said. “I don’t know what she was thinking, but I was a bit all over the place.

A huge congratulations to @zoealdcroft_ who has been named World Rugby's Women's 15s Player of the Year. ??

The moment she found out!! ?? pic.twitter.com/WIMkTpgdud

“I didn’t know what to think, and I wasn’t the one that won it. It wasn’t just the award if that makes sense. It was the captaincy, starting four out of four. The whole month was absolutely mental.”

Whilst his fiancé’s efforts are focused on being in the best possible condition for the Rugby World Cup in New Zealand at the end of this year, Stratford’s remain much closer to home. Admitting that he is the one that struggles the most to switch off from rugby, the Hartpury man is at his self-deprecating best when asked if his partner’s good habits have rubbed off on him.

“She is honestly so tough on herself and strives for perfection in everything,” Stratford said. “It is biased me saying this, but she is the best professional I have ever met.

“The amount of pressure she puts on herself to achieve, be in the best condition, know every detail and everything is unbelievable.

“I have thought to myself that I need to pull my finger out because people are always saying to me that my missus is better than me at rugby.

“To be fair, to most people I turn around and say, 'she’s better than you as well!' It is true, and it does make me want to play better. Obviously, that hasn’t happened at the moment.

“She does like to push me and she’ll be brutally honest with me at feedback. If she sees me play, she’ll tell me something is s*** or mention a missed tackle. It is what I need and it is the way she is. Her style.”