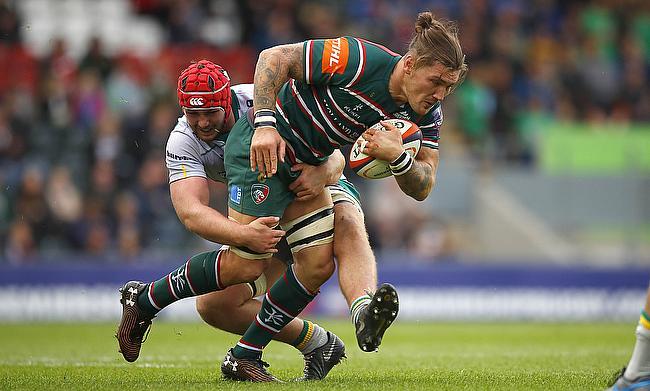 Guy Thompson has told Talking Rugby Union the decision by Leicester Tigers not to review his contract was a ‘business’ choice by the club.

At the start of the month, the Midlands outfit announced Thompson, who moved to Welford Road in 2018, would not be staying with the Tigers next season.

The back-row has scored seven tries in 33 appearances for Leicester, but his stint with Geordan Murphy’s side will not continue after the conclusion of this campaign.

Speaking on the TRU x Looseheadz podcast last week, Thompson revealed how tough it was for him to think he would, effectively, be unemployed but the flanker admits he is now excited by the new opportunities which lie ahead.

“As a rugby player, I have been in the game for a while now,” said Thompson.

“I kind of understand how things work so if a club hasn’t spoken to you before March, then you know you are probably not in their plans moving forward. I was on the phone to my agent a couple of times and I kind of said to him, I don’t think Leicester are going to be keen. They have not had any conversations with me.

“It wasn’t until the end of February/beginning of March when Geordie [Geordan Murphy] grabbed me. He wanted a chat and told me he was the bearer of bad news. I said to him I understand. I’d kind of guessed it. It was not personal. I really like Geordie and he said the same. It was not personal. It is business and as much a people want to say it is not rugby, it is business. He said ‘we tried, but we just couldn’t keep you.’ He wanted to let me know himself that they were going to let me go.

“For me, it got real then. I probably had my head in the sand. Maybe it was a bit of arrogance thinking they would probably offer me something towards the end and that was my own stupidity.

“I left that day, finished training because I didn’t want things to bother me or get in the way. I got in the car and was driving home and I was like ‘This isn’t great. I am going to be unemployed. I have got a mortgage to pay, bills to pay and I am not in a situation finically or academically yet where I am ready to retire.’ ‘Ah Oh’ is the nicest way I can put It! I remember lying in bed that night thinking about what I was going to do. Straight away, I didn’t know what I was going to do. I guess I have never really suffered from depression myself, but I guess that is the closest I’ve got. I did lie there thinking hard about what was available to me.

“I will be able to say now, but I won’t be able to say where, I have signed it somewhere. I have got something secured for next season and it is something I am really excited about. Once that offer was made to me, I still didn’t just sign it because it was any offer.

“Even then, I kept myself to myself and weighed up the pros and cons and even when it felt like I had no other option, that wasn’t the case.

“I still realised there were still plenty of opportunities out there I just hadn’t seen yet. I guess going forward which I want people to take from me is firstly, just because you don’t see the opportunity, it doesn’t mean they are not there. The fact that I was lay in bed worrying about my future and I had nothing, wasn’t pointless because it helped me evaluate things, but it is worry that I didn’t need at the time and I didn’t need to worry like that because I had opportunities.

“They just hadn’t appeared yet. It did really make me think about my future and it really made me think about what my next move had to be. I can safely say what I have signed is extremely exciting for me.”