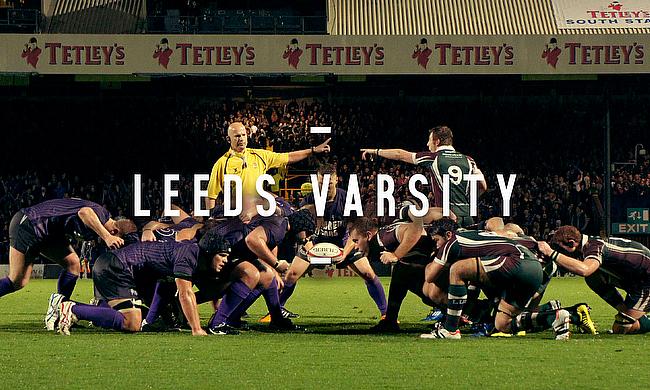 The Leeds Varisty is this Friday at Headingly Stadium
©Leeds Varsity

With 2016 marking the inaugural season of the brand new ‘Super Rugby’ format for BUCS Rugby which in conjunction with Home Unions and Rugby Vertical will see the eight best rugby-playing universities across England and Wales go head-to-head in a brand new competition, university rugby is entering into an exciting new phase of its sterling history.

But for Leeds Beckett, one of the aforementioned eight Super Rugby BUCS teams, there is the small matter of the annual Men’s Rugby Union Varsity match against cross-city rivals Leeds University to tackle before the new season can begin proper.

The marque event of the two universities’ annual varsity series which sees ‘Uni of’ and Beckett clash sixty times across twenty-five different sports in a single day, the fixture is held at Yorkshire Carnegie and Leeds Rhinos’ Headingley Stadium and serves as the culmination of the day’s sporting action with attendances frequently pushing well past the 15,000 mark.

Despite Leeds Beckett’s historic dominance of the fixture – since the game’s inception in 2004, Beckett have won every single matchup between the two sides including last year’s 27-13 victory – the encounter is always a feisty affair (usually helped by the raucous crowd) that showcases the continuing strength of rugby in Yorkshire.

And whilst the disparity between the two universities’ rugby programs is apparent (University of Leeds finished sixth out of seven in the second-tier Premier North ‘A’ competition last season and failed to qualify for the new Super Rugby format), the Wednesday evening encounter will once again place the Leodensian rugby bragging rights up for grabs between two of the fiercest rivals in university sport.

Ahead of Wednesday’s fixture, Talking Rugby Union spoke to Leeds Beckett captain Josh Longson about his side’s preparations for the game and what it means to represent his university in one of the famous traditions in modern rugby.

TRU: How are preparations coming ahead of Wednesday? Are you and the team confident of another win after last year’s 27-13 victory?

JL: Yeah definitely, there’s been quite a lot of change with the league system this year so we’re looking ahead to that but of course varsity is always a big game and again we want to try and get the victory. Personally with it being my last one I want to make sure we go out on a high.

TRU: How does playing in a varsity match, against your rival university, compare to other BUCS league fixtures?

JL: It’s just completely different. The atmosphere at varsity with nearly 15,000 students is unbelievable and since most of us won’t get to play near anything like that again so it’s pretty amazing. And then even though usually when we play [University of] Leeds in the league we’re able to beat them quite convincingly, varsity is a completely different game, there’s different pressures involved and it can get to the players.

TRU: Do you think the atmosphere that is unique to varsity games has an impact on performances then?

JL: Definitely, in the past we’ve been able to put forty points past Leeds [University] in the league fixtures but varsity is always a relatively tight game and the crowd can sometimes get to one team and make the other team play better and vice-versa. The crowd can massively influence how the fixture goes.

TRU: Do you factor in that unique crowd and atmosphere into your approach to the varsity match in comparison to other BUCS fixtures?

JL: Not necessarily, we do everything exactly the same so we train exactly the same, we run through on a Tuesday as we normally would do. Personally I try and treat it just like another game, before my first one I was nervous but I’ve played in a few now and although it still feels amazing and I’m still not used to it, I’ve gotten over the fear factor. For the senior boys it’s now about making sure the freshers and the other players new to it this year don’t try and look at it too much like a spectacle and just try and keep everyone grounded and think of it as another game of rugby.

TRU: Finally, as captain you know your team better than anybody else. Is there anybody in the Beckett team that you think we should keep a particular eye out for on Wednesday?

JL: We’ve got a couple of new boys starting this year, Louis [Brown] and Charlie [Venables] who both play fullback are both high-calibre players new to the team. Jack Barnard who has previously been with Yorkshire Carnegie and Wharfedale will be a threat in the backrow. We’ve got a pretty new-look team this year so it’ll be good to see how we go but I’d say Leeds Uni should be worried.

Talking Rugby Union will have highlights of Wednesday’s Leeds Varsity fixture online later this week along with continued coverage of BUCS rugby throughout the upcoming season.