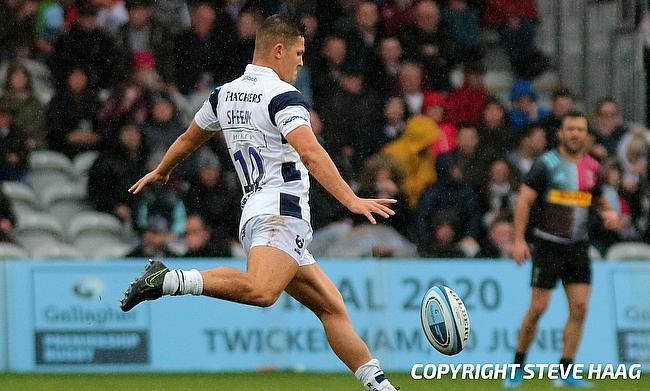 A penalty try in the 77th minute proved decisive as Bristol Bears edged out Saracens in their Premiership face-off at Ashton Gate on Saturday.

The win has taken Bristol to the second place in the table with 43 points while Saracens, who face automatic relegation at the end of the season suffered their fifth defeat from nine games.

Jamie George captained Saracens in the absence of Owen Farrell, while Alex Goode was handed the kicking duty. Elliot Daly missed the game through injury but despite that Saracens had a flurry of stars with the Vunipola brothers, Sean Maitland, George and Vincent Koch.

The opening half saw Goode and Callum Sheedy exchanged two penalties apiece as the teams were levelled at 6-6.

The trend continued in the first 10 minutes of the second half as the teams continued to remain level at 9-9 before Goode's fourth three-pointer at the start of the final quarter gave Mark McCall's men a slender three-point lead.

The decisive moment came in the 77th minute when George was sin-binned for illegally entered a ruck on Saracens' line that also resulted in a penalty try for Bristol to make it 16-12. Bristol managed to survive a late onslaught from Saracens despite a yellow-card to Max Lahiff in the close stage.

"It wasn't beautiful weather but, if we want to be where we are going, you have to get excited by playing how you have to play," said Bristol Bears director of rugby Pat Lam.

"Things like the weather were in Saracens' favour with the pack they had picked, and we didn't have as much time on the ball.

"But our defence and our scrummaging were huge. Credit to our coaches for that. The boys gutsed it out. We hung on in there in the end"