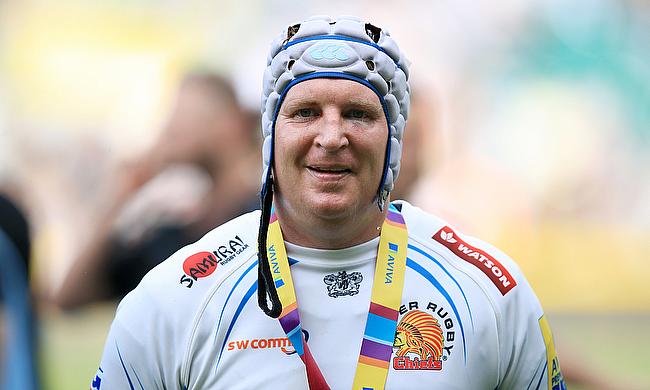 A late Thomas Waldrom try followed by a conversion from Joe Simmonds proved decisive as Exeter Chiefs went on to edge out Northampton Saints 31-30 at Sandy Park on Saturday to reclaim the top spot in the Aviva Premiership.

Exeter started the game with a setback as scrum-half Will Chudley left the field for a Head Injury Assessment in the first minute with Stu Townsend replacing him.

It was Northampton, who got their first points on the board as brilliant work from Jamie Gibson allowed Rob Horne to cross over in the 12th minute that was improved by Piers Francis.

As Northampton collapsed a driving line-out, prop Campese Ma’afu was yellow-carded in the 17th minute that also resulted in a penalty try for Exeter Chiefs as the scores were levelled 7-7.

Northampton suffered another setback when Francis left the field for an HIA and replacement Stephen Myler scored a penalty to get them to a three point lead. After 35 minutes, Exeter took the lead for the first time when a drive from Greg Holmes set up a try for Alec Hepburn, but they were not ahead for long as an excellent break from Luther Burrell allowed Horne to send Ben Foden racing to the line. Francis converted to give his side a 14-17 at half-time.

Three minutes after the break, Northampton went on to stretch the lead with a converted try from Harry Mallinder but Gareth Steenson with his 51st-minute penalty got the gap down to seven points. However back to back three pointers from Francis meant by the end of the third quarter, the visitors had a 17-30 lead.

As the final 10 minutes kicked-in, a break from Olly Woodburn was carried on by Phil Dollman for Don Armand and Simmonds conversion made it 24-30. Northampton though let things slip in the closing stage as Teimana Harrison was yellow-carded in the 79th minute that was capitalised by Waldrom and Simmonds to seal a one point victory for Rob Baxter's side.