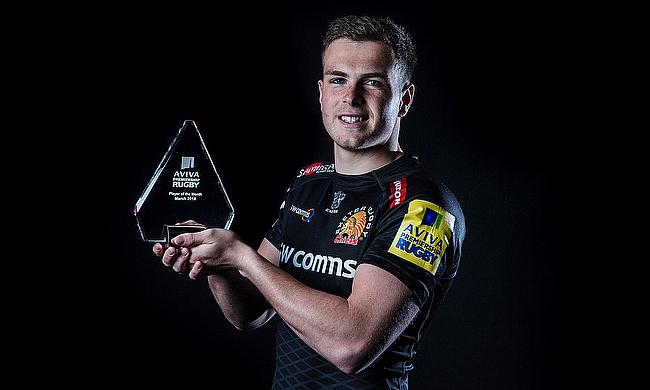 Simmonds made a big impact for the Chiefs in March, instrumental in crucial wins over Saracens and Bath, leaving his club at the top of the Aviva Premiership Rugby table.

And Rugby World Cup winner Will Greenwood said: “I love it when a kid bides his time and then takes his chance.

“Gareth Steenson is part of the furniture at Exeter so young Joe has had to be patient, and he has clearly been watching and learning.

“Joe looks in total control of this very very good Exeter Chiefs team. He has pace, zip, is tough and kicks his goals. He is very classy indeed.”

Simmonds was judged by a panel of experts as the player who made the biggest impact in the League over the month March. He was involved in a four-way battle for the latest title, eventually beating Sale Sharks scrum-half Faf de Klerk, Gloucester Rugby centre Henry Trinder and Leicester Tigers full-back Telusa Veaniu to the title.

Simmonds wins a trophy and a £250 donation to the charity of his choice.