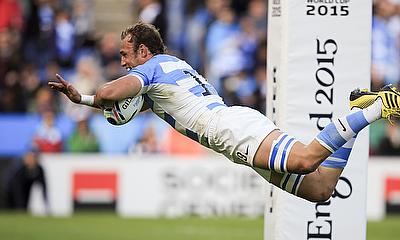 Argentina's Leonardo Senatore scored a hat-trick for the Jaguares in Super Rugby.
©PA

Jaguares finally managed to get back to winning ways defeating Kings with a margin of 73-27 at Estadio Jose Amalfitani in their Super Rugby Clash.

The win which is their second in Super Rugby has taken them to the third position in the South African Conference Two with 12 points from nine games.

Jaguares exploited the lacklustre defence of Kings and scored as many as six tries in the first half and raced to 40 points at the halfway mark. Flyhalf Nicholas Sanchez contributed 15 points in it.

The domination from the Argentina team continued as they crossed the 60-point mark in just over 50-minute mark.

The game saw Jaguares hold 55% of possession and ended the match with 11 tries ensuring their first win at home.

In contrast a high-flying collision between two players resulted in sin-bin for Kings’ Wing Luzuko Vulindlu at the start of the second half.

Overall, Kings could manage only four tries resulting in yet another defeat which keeps them at the last position in the South African Conference Two.

Jaguares skipper Martin Landajo was pleased with the result and hopes his team can make a turnaround after losing seven consecutive games prior to this.

"It was a good win, we've had a few bad games recently so we had to play some good rugby," said skipper Martin Landajo, one of nine try scorers for the hosts.

"We did it here at home so we're happy but this is a long tournament so we need to keep improving."

"It's a relief to have got such a win, we had tried some of these things in other matches and they didn't come off so it's like a new beginning," he added.

Jaguares next encounter will be against the second placed Sharks on 15th May while Kings will take on the Blues next on 7th May.