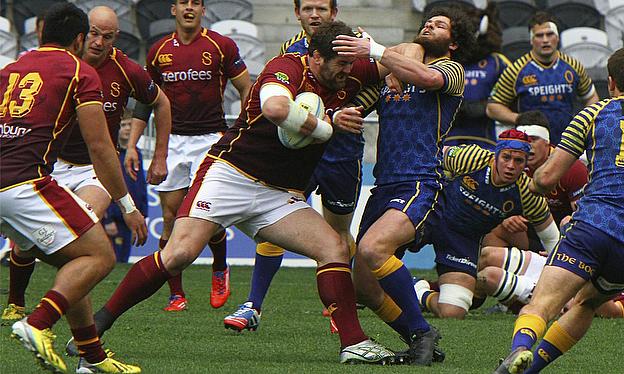 In the past few months I have written on subjects in the Premiership; ranging from Harlequins form, to player profiles on Prop's, and Fly Half's. So I hope you will allow me a little bit of self-indulgence, I am lucky to play my rugby in a very competitive league but had things gone differently, had fine margins not gone in my favour, I may not even be alive today, let alone still playing our beautiful game. This is my story, and it begins in 2007, I was 15/16 a young lock at the start of his rugby career, making a name for myself at county level, dynamic in the loose and superior in the line out.

It all came to a crashing halt in a matter of seconds, I took a crash ball but instead of taking the contact I suddenly found myself turned upside down and heading quickly to the ground “ a spear tackle. In the mud someone slipped while trying to secure the ball and their knees crashed into my twisted spine. In that moment, I had broken my spine; two of the vertebrae in the lumber region were, for lack of a better word, smashed. Honestly I can't tell you an awful lot about the immediate sequence after the accident (and I stress, this was a freak accident, I level no blame at anyone) a rush of bodies and voices, a sudden rush of pain quickly replaced by a numb sensation and my father's face looking down on me. What began was one of the longest, hardest but ultimately deeply rewarding journeys of my life.

More recently I sustained a serious abdomen injury that developed towards the end of my first season in National 2, I ignored it and went on the inaugural National Seven Series, but at the end of the Newquay Surf Sevens it was clear something was wrong. No one realised how bad the injury actually was until the surgeon opened me up. 14 months down the line I can say I am about three weeks away from returning to training.

When I did my spine in I was forced to work towards my GCSE's from hospital and more recently my abdomen injury has significantly disrupted work to the point I had concerns over my job security. I have no advice for others going through this just huge respect. I do hope though that my story can give other's some hope that there is a light at the end of the tunnel.

When I came out of hospital I was left a shadow of my former self, a cheap imitation, about 5 stone in weight and movement was difficult. I had spent the last 12 months of my life lying prone in a chest to knee cast. At first the only movement I did was in a hydrotherapy pool, where the water could support me, then onto assisted physio until I reached an acceptable level of movement that gave me a standard of life.

These were the darkest days, my determination to return to rugby had kept me going but now I could walk and interact again I didn't know where to start. I was isolated from a huge chunk of my life, my passion and my social life that revolved around my team mates. I started to run for miles and miles on a nearly daily basis, introducing shuttle runs and suicides. I ended up running the 100 and 800metres for county and I was still pretty good over cross country. That was all I did though, I didn't know about eating, about building up mass and so I never dramatically increased my weight. The level of muscle wastage was huge, and I went from this to running and never thought about increasing my mobility. The result of this is, since I have stepped up to National 2, I have seen a sports therapist every single week, and will probably have to until I retire.

When I finally returned to rugby after my spinal injury, my huge reserves of fitness and passion for the game meant I could easily charge around for the full eighty minutes, happily disrupting the opposition from the blindside and at line out's my team mates threw me up at the front like a feather. Handling and all the other basics quickly returned and I had an unrelenting hunger to be involved in everything. My first game back I came off the bench, my first touch of the ball was all too familiar, a muddy field and a crash ball off a ruck. Did I make ground? No, I was knocked back but I recycled the ball safely, I was intact and the confidence grew. When I return from my latest lay off I know the first hit will hurt. It will shake me, and, to be honest readers, I'm worried how I'll fair but I won't let it define or change the way I play and the only way from there is up.

This time I have learned though, Talking Rugby Union and volunteering as a coach for a local club has meant I have remained involved in the sport that I love. I have also been working hard with a personal trainer, which has actually resulted in me increasing my muscle mass. I guess I have seen some opportunities in this latest lay off to get things right that I never did before. I've focused on my mental recovery as well as physical, I've worked with the right people and I've been patient to the point of accepting that I may only get two or three games this season. Maybe none, but there is an opportunity to be in peak condition come pre-season and build for next season.

My spinal injury wasn't the end, I had to start again, even make a change to the centres where far from being the crash ball you'd expect I kick goals and provide the distribution and pace. All skills I had to learn and master, I never returned to county rugby but I picked up a contract in National 2 and that is where your find me next season, having learned some lessons and adding a few more scars to my collection.

Not all injuries are as serious, but injuries are a very real shadow that hangs over players of all ages, in all leagues. Jonny Wilkinson a man, who knows a lot about injuries and how they can affect a career, recently tweeted "We get good treatment and surgeons. Not sure if I would've/could've carried on if not a pro. Fair play to the courage it must take to carry on after injury when you have to work all day as well as train and play! Admiration and respect! 

To any injured out there, you have my very best wishes.