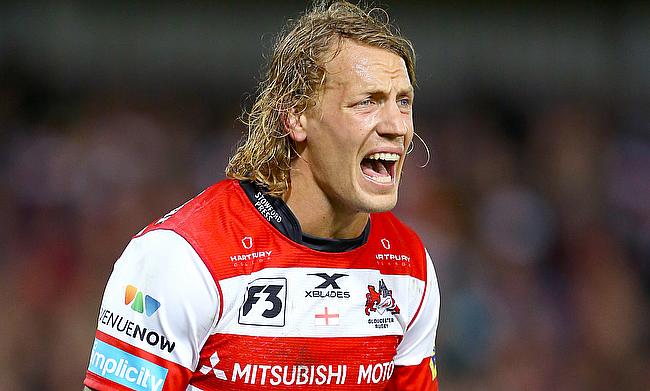 Gloucester Rugby scored three tries in the final 10 minutes as they trounced Harlequins 37-9 in their Aviva Premiership encounter on Saturday.

The win has taken Gloucester to the sixth position in the table with 56 points and are in line with the European Champions Cup qualification while Harlequins are at the ninth place with 36 points. This is also Harlequins' seventh defeat in eight games.

Billy Twelvetrees kicked a third-minute penalty to get Gloucester off the mark but his efforts were negated by Marcus Smith, who slotted a three-pointer in the fifth minute.

The points continued to flow in the opening stage and this time Twelvetrees offloaded to CallumBraley in the 7th minute as the scrum-half scored the opening try. Twelvetrees also added the extras to make it 10-3.The first half ended with a 13-9 lead for Gloucester after Twelvetrees kicked his second three-pointer but Smith kept the Quins in the game with two more penalties.

Twelvetrees extended Gloucester's lead to seven points with a penalty kick in the 46th minute and with 10 minutes left in the game, Quins had a chance to reduce the arrears but Smith missed a straightforward penalty.

Instead, the Cherry and Whites upped the ante further in the closing stage when a long pass from Mark Atkinson set up Henry Trinder, who in turn sent Jason Woodward over the line in the 71st minute.

Jake Polledri and Ruan Ackermann piled on further trouble for the Quins with touchdowns in the 74th and 80th minutes respectively and Twelvetrees kicked all the three conversions to complete a 37-9 win for Gloucester.

The Quins also suffered a major setback when Jack Clifford left the field injured in the eighth minute of the game and the club's director of rugby John Kingston confirmed that the England international is ruled out of the remainder of the season.

"We were stunned by the level of performance last week. I knew there would be a reaction as the boys are proud of this club.

"It was on a knife-edge when it was only 16-9, but we made too many errors and they deserved to win.

"Jack Clifford has torn his hamstring off the bone and is out for the season. He will need an operation."