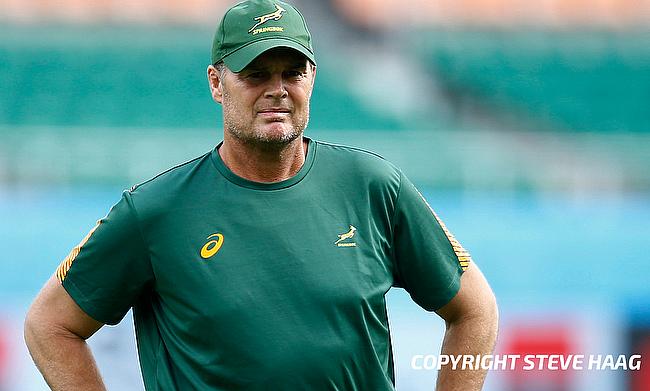 There were reports that the Springboks are committed to remain with the Rugby Championship until 2025 following which they are planning to align themselves with the northern hemisphere competition with South African clubs already made their exit from Super Rugby and have joined Europe based United Rugby Championship.

Even though Six Nations Rugby has played down reports of having any discussion with South Africa joining the competition, Erasmus, who coached the Springboks to the 2019 World Cup triumph said linking up with the Northern Hemisphere competition will benefit them.

“Speaking from the South African side of the fence, I would love to see the Springboks in the Six Nations. The style of play, the travel and the time zones would all suit South Africa,” he told Daily Mail.

“You could fly in overnight on Thursday, play on a Saturday and fly back on Sunday. It would be easy. When we go to Australia or New Zealand, you wake up at 2am and don’t know what day it is.

“If someone with proper research showed me that South Africa joining the Six Nations would make the Rugby Championship weaker and damage the growth of the global game, then we shouldn’t do it.

“But right now, speaking as a South African, I think joining the Six Nations would be awesome.”

Erasmus believes while it is important to value traditions, Springboks should not hesitate to make a switch if it suits them better.

“I think you only screw up tradition if you make something worse,” Erasmus told the Daily Mail.

“Will South Africa make the Six Nations worse? Well, we might have a relapse, go back to playing attractive running rugby and be sixth in the world.

“If we are number six or seven in the world it probably doesn’t benefit the Six Nations. Or we might keep playing boring rugby and stay at number one, two or three. Surely the more high-class teams you get in the competition the better.”