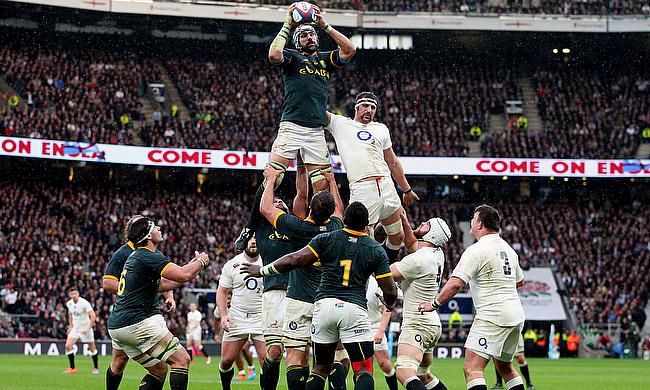 The reigning World Cup champions will sooner or later have to make a decision on who they select as their first choice fullback for the 2023 World Cup in France.

The incumbent fullback is Willie le Roux but by the time the opening match of the competition is played at the Stade de France, le Roux will be 34.

Given that this is the case, the Springbok think tank will have to put their minds into figuring out who they hand the number 15 jersey to before the tournament gets underway in Paris. Strangely enough, the latest rugby union betting odds price the Boks at 5/1 to defend their World Cup crown, which indicates that the need to decide on a settled starting lineup is a pressing one.

Of course, the South Africans will argue that they are indeed settled and only need to address the fullback position. A convincing series win against the British and Irish Lions in 2021 does tend to add weight to that argument which does leave you scratching your head at the thought of this same dominant team being priced as outside favourites to make it back-to-back World Cup titles.

Additionally, when it comes to the conundrum of the fullback position, the Boks are, if anything, spoilt for choice. Indeed, it isn’t a case of losing le Roux and wondering who will step into his shoes given that there are a number of world-class players who could fill the role tomorrow. As far as le Roux's long-term prospects go, the 32-year-old will certainly tell you that he is aiming to make the starting lineup in time for the Bok’s opener against Scotland in Marseille.

Just a kid from Strand, living his dream ?????? pic.twitter.com/9b5BIpaJxY

There is, however, a large contingent of South African fans who feel like the fullback’s time in the role has come to a natural end, and relying on him to help spearhead a World Cup defence would be misguided.

It certainly is a game of opinions but no one can dispute the fact that over the last two years, le Roux has battled under the high ball when it comes to catching and has been inconsistent when it comes to finding touch with his kicking.

Total nightmare to be under one swirling around like this. pic.twitter.com/TbaowZAlp8

With this being the case, Cheslin Kolbe has been the name thrown into the mix to succeed le Roux but the Boks could end up weakening their attacking threat on the wing if they do this. Indeed, the Toulon star is without a doubt the most talented winger in the world and perhaps would be lost at number 15. At least, the Boks wouldn't be able to rely on their talisman to open up the opposition late on with a barnstorming try from the wing as Kolbe did in the triumphant 2019 World Cup final against England.

Just a kid from Strand, living his dream ?????? pic.twitter.com/9b5BIpaJxY

Rather, South Africa should turn to 24-year-old Aphelele Fassi who is making waves with the Sharks in Durban. Fassi made an immediate impact at international level after scoring a try on his debut against Georgia but game time has been limited since with le Roux holding down the position. The time for change is now and if the Springboks want an established player in the fullback role in time for the 2023 World Cup then they have to hand number 15 duties to Aphelele Fassi very soon.