Hinckley and Stourbridge set for showdown 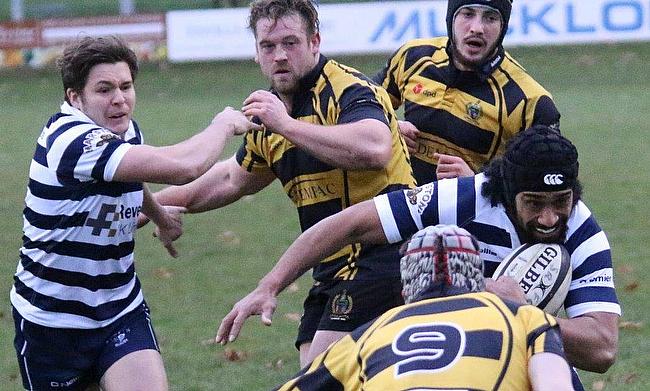 There is an early Christmas treat awaiting us in National Two North this weekend as two of the possible title contenders clash in the Midlands when Stourbridge entertain Hinckley.

Hinckley are currently the league leaders, but they are level on points with Stour who occupy third spot in the division following a difficult November.

Neil Mitchell’s side had entered last month with a 100 per cent record, but now they are very much embroiled in a promotion race alongside Hinckley and three other sides.

Second placed Tynedale will be keeping close tabs on proceedings in the Midlands this weekend when they travel to Luctonians while Sedgley Park and Sale FC will be waiting to pounce if they get their respective jobs done against Huddersfield and Chester.

Elsewhere in National Two North in Round 13, South Leicester go to bottom of the table Wharfedale and Sheffield Tigers visit Blaydon while Leicester Lions take the trip to Sheffield and Macclesfield take on Otley in a big game at the wrong end of the division.

This week, Hinckley's social media has been dominated by one iconic moment from their victory against Luctonians. A powerful scrum from the Leicestershire side knocked down their posts and the video has gone viral. However, something that has gone slightly under the radar is the fact that Hinckley went to the top of National Two North last Saturday - just 19 months after clinching promotion from National Three. It has been a remarkable journey so far for the Midlands club and they are showing no signs of slowing down as they enter this top of the table clash with Stourbridge having won their last six matches.

George Chuter’s side are level on points with Tynedale (2nd) and Stourbridge (3rd) heading into Round 13, but their excellent form has coincided with Stourbridge’s downturn in results. Neil Mitchell’s men had a November to forget as they ended the month without a win and an 11 point lead at the top of the division was completely wiped out. Now, Stour have an excellent chance to put the last three results behind them by claiming what could be a vital victory in the race for promotion.

There is no doubt that there will be supporters at Mortimer Park scanning social media and the internet this weekend when Tynedale visit Luctonians. Second place Tyne will certainly want to the know the outcome in the Midlands, but Scott Lawson’s side have to be focused on getting their own job done in Herefordshire as they look to build on three straight victories.

Tyne have recovered superbly from a mini-blip and Luctonians will be hoping to respond as soon as possible from their wretched run of form. Head Coach Ryan Watkins has said in recent weeks that his side can turn their fortunes around, but they head into this weekend having lost their last seven matches and they are just three points ahead of the relegation places. Can the Lucts begin December on a high?

Sedgley Park are going about their business nicely. Once again, the men from Park Lane are having a strong season as they look to break into the top two and six wins from their last seven matches has left them on the cusp of doing just that. It sounds obvious, but Matt Bebbington’s men have been outscoring their opposition and an average point’s total of just under 41 from their previous six victories highlights that point.

Sedge sit just a point behind the top three as they take the trip to Huddersfield this weekend, but this will be a difficult game for the Manchester-based club. Field are certainly enjoying their return to National Two North as they currently occupy ninth in the table and more importantly, they are already 17 points clear of the relegation places. Gareth Lewis’ side have won four of their last five matches and have also lost just once at Lockwood Park this term so with confidence oozing, Huddersfield may fancy their chances of gaining a result this Saturday.

Sale FC clinched their fifth win on the spin in Round 12 to leave the men from Heywood Road just two points off top spot. Jonathan Keep’s side are clocking up the wins and last year’s play-off finalists are once again serious challengers for promotion.

Sale head to Chester this weekend looking to keep the pressure on the four sides which are in touching distance of them, but this all northwest affair won’t be straightforward for the visitors. Chester come into December on the back off an excellent away win against Sheffield Tigers, but they also return to Hare Lane where they have been very good this term. Nick Joseph’s men have won four of their five matches on their own turf and they will be hoping for some more success in front of their own supports this weekend as they look to halt Sale in their tracks.

There would have been pats on the back for Rickie Aley last weekend as once again South Leicester’s fly-half kicked his side to a positive result in National Two North. Aley was instrumental in South claiming a share of the spoils against Stourbridge last weekend and the Midlands side will be aiming to keep up their excellent recent form when they take the trip to bottom of the table Wharfedale tomorrow.

South have been very solid this year and their position of sixth place in the table highlights that point, but unfortunately for their hosts, it has been the complete opposite. Dale are rooted to the foot of the division having won just one of their 12 matches so far this term. James Doherty’s side are nine points adrift of safety and a first home win of the campaign would be a very welcome early Christmas gift as they look to avoid the drop for the second season in a row.

Sheffield Tigers’ winning run came to an end last Saturday as they were narrowly beaten by Chester at Dore Moor. The Tigers had won their last five games heading into the final weekend of November, but even though they were beaten in Round 12, it has still been an excellent start to the season for the Yorkshire side. After a remarkable escape from relegation last term, the Tigers currently accommodate seventh place in the table and are 21 points clear of the bottom three so they travel north tomorrow hoping to maintain their good form.

Blaydon are their hosts and Matt Thompson’s men have really struggled in the opening three months of the campaign following relegation from National One. The Crows are 11th in the table having achieved just three wins so far this season. Blaydon now have four games before the Christmas to put a positive spin on a difficult year, starting with this fixture against Sheffield Tigers.

Leicester Lions would have been disappointed last weekend following their defeat at home to Huddersfield. Jack Heald’s side fell to their first loss in three matches, but the bigger picture is a lot more positive for the Lions. The Midlands club have picked up six victories from their last eight games which leaves them eighth in the table and they are strong favourites to continue their good form when they travel to Sheffield this weekend.

The Yorkshire side will be itching to return to action having had two weeks off. Following the first break of the season, their fixture against Macclesfield last weekend was postponed so whether the time off plays to their advantage, we will wait and see. Last Saturday, Sheffield would have been pleased to see the sides around them all drop points so a second victory of the season would be the perfect start to the festive period.

As mentioned above, Macclesfield were not involved in Round 12 due to a frozen pitch at Priory Park. The Blues are now entering a crucial period in their season as they face some of the teams around them in the division, starting with Otley this weekend. Giles Heagerty’s men have found life difficult back in National Two North following just three wins from their 12 matches, but a victory in Yorkshire tomorrow would be a significant result in their season.

Macc may well fancy their chances this Saturday as Otley welcome the Cheshire side to Cross Green on the back of a heavy defeat to Tynedale. In fact, Peter Clegg’s side have not tasted victory for nine matches now – a run which stretches back to the middle of September. Otley find themselves in the bottom three as things stand, but they are only three points adrift of safety so a first win for just under three months could see them out of the relegation places on Saturday night.