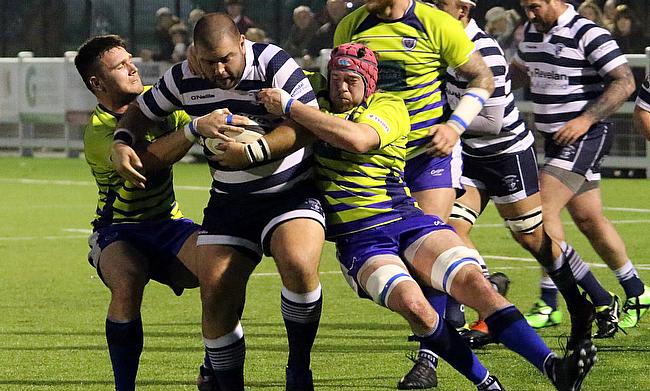 Stefan Thorpe tries to wrestle away from Sale FC, but ultimately the visitors came out on top at Stourton Park
©Ceri Davies

Sale FC produced a commanding performance as they inflicted a second defeat in as many weeks on table toppers Stourbridge.

The men from Heywood Road were excellent in the Midlands and thoroughly deserved their fourth win on the spin while Stour’s latest defeat leaves them just two points clear at the top.

Both Hinckley and Tynedale picked up victories, but in contrasting styles, while fourth placed Sedgley Park eased to a win at Chester.

Like last weekend, eight of the top nine sides all triumphed including Sheffield Tigers, who manufactured a remarkable comeback to beat Wharfedale.

Robbie Forbes’ try helped Stourbridge lead 5-0, but Chris Mayor’s touch down as well as tries from Tom Ailes and Andy Hughes put Sale 24-11 up at the break.

The visitors then extended their advantage as Anthony Bingham notched a brace to put Sale in complete control on Stour’s new AGP pitch.

The table toppers did have the final say on proceedings as Nigel Mukarati crashed over late on, but Stour’s lead at the summit is now down to two points, heading into the first break of the season.

Hinckley sealed their fifth win in a row thanks to a bonus-point victory over an injury hit Otley at Cross Green.

Joe Rowntree and Hinckley’s Joe Glover each kicked a penalty in the first-half, but tries from Callum Dacey, Mitchell Lamb and Sam Driver gave the visitors the lead at the break.

Thomas O’Donnell’s score got Otley off to the perfect start after the interval, but the hosts would not cross the line again until a penalty try on the 78th minute.

The bonus point win at Priory Park also secured Tyne’s fourth away victory of the campaign as the northeast side gained ground on Stourbridge before the first break in the season.

Tyne were 38-0 up at the break after a commanding first half which saw Jamie Blamire, Guy Pike, Rob Parker, Oli Walker, Dan Taylor and Joe Mills all score.

However, this was to be a game of two halves as Macclesfield, who have won just one of their last eight games, launched a remarkable fightback.

Ryan Parkinson grabbed a brace before a penalty try and scores from Myles Hall and Frankie Barker made it a three point game, but Tyne held on for the win.

Sedgley Park ran in five tries as Matthew Bebbington’s side thrashed Chester to move to within three points of top spot in National Two North.

Chester had not lost at home all term, but they were blown away by three tries in the first half which left them 19-0 down at the break.

Matt Crow gave the hosts some hope with his try shortly after the interval, but Sedge reasserted their dominance with two more scores to clinch their sixth win from their last seven matches.

South Leicester overcame a spirted comeback to pull off an excellent win against Luctonians in a pulsating National Two North contest.

This would have been a tough loss for Luctonians, for whom Will Burton, Joe White, Josh Watkins and Piers Morall all dotted down.

Burton’s penalty had levelled the scores and it looked for all the world like the Lucts would arrest a five game losing streak, but Aley snatch the win at the death.

Leicester Lions held off a fightback from Blaydon to secure a victory at Crow Trees.

James Wise’s try put the visitors ahead at the interval, but Blaydon responded immediately after the break as Joel Matavasi landed a penalty.

The Lions hit back with a converted penalty try, but two scores from Jack Appleton gave Blaydon hope of pinching the victory with 13 minutes left to play.

However, a penalty from James Morgan was enough to see Leicester Lions claim the win.

Sheffield Tigers produced a stunning recovery to beat Wharfedale and secure their fifth in in a row.

Dale had led 33-8, but 45 unanswered points saw the Tigers seal a remarkable comeback at the Avenue.

Scores from Kieran Frost, Joe Altham, George Hedgley and Richard Rhodes, as well as a penalty try, put James Doherty’s side in complete control of this contest early in the second period, but the in-form visitors had other ideas.

Henri Packard had opened the scoring for the afternoon, but his side were about to launch a sensational fightback.

Jamie Broadley and Greg Mellor began the charge for the Tigers before Packard wrapped up his hat-trick which gave Sheffield the lead.

Broadley then completed his own trio before Packard went over again and Mark Ireland rounded off the scoring for the visitors in an amazing contest in Yorkshire.

Huddersfield took a while to get going but eventually earned a win over Sheffield at Abbeydale Road.

Lewis Bradley did crash over midway through the first half for Field as they led 10-6 at half-time, with Stephen Depledge landing two penalties for the hosts.

Following several phases, Fergus Wood touched down after the interval to give Sheffield the lead but three successive penalties from Harry Davey put the visitors back in front.

Danny Granger produced an impressive burst of speed to round the defence as Huddersfield extended their advantage, but Sheffield kept themselves in the contest when Lewis Bowman dotted down.

But, the away side had the final say on proceedings as Adam Malthouse scored from close range to give Gareth Lewis’ side their first victory on their travels.