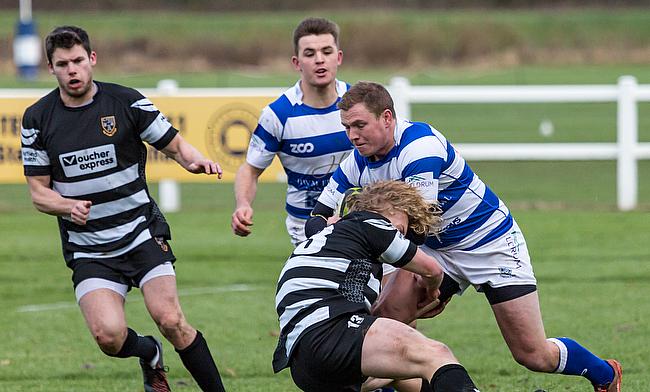 Hinckley moved to the top of National Two North following a convincing display against Luctonians at Leicester Road.

Hinckley moved to the top of National Two North following a convincing display against Luctonians at Leicester Road.

The Midlands sides’ bonus-point success moved them to the summit and they are level on points with Tynedale and Stourbridge, who have now slipped down to third in the table.

Stour had been leading the way at the start of the month, but three games without a win in November as seen them lose top spot for the time being.

Sedgley Park and Sale FC are also very much in this promotion race as both sides remain hot on the heels of the top three following comfortable victories in Round 12.

Elsewhere in the division, there were away wins for Chester and Huddersfield while Macclesfield v Sheffield was postponed due to a frozen pitch.

Hinckley moved to the top of National Two North after they extended their winning streak to six matches following victory over Luctonians.

Scrum from @Hinckley_Rugby destroys the posts. Had to move pitches. Just to confirm, rugby still the winner. pic.twitter.com/IqfynmVlG3

A brace from Josh Watkins put Luctonians ahead, but Hinckley hit back to lead 19-12 at half-time with James Martin, Callum Dacey and Joe Glover crossing.

Tries via Alex Salt and Steve Harvey increased the lead and three more scores in the second half by Hinckley completed the rout to leave them at the summit.

Tynedale are level on points with league leaders Hinckley following an 11-try thrashing of Otley at Corbridge.

Oli Walker opened the scoring in the second minute, while James Spencer, Guy Pike, Jamie Blamire, Joe Mills (2) and Tom Bramwell all crossed to wrap up a bonus point by half-time.

Four further tries followed with Spencer getting his second before Nick Cairns (2) and Dan Taylor completed the demolition.

Joe Graham and Ben Steele scored the Yorkshire side’s only tries of the game.

Stourbridge snatched a late draw against South Leicester, but Neil Mitchell’s men have now slipped down to third in the table following no win in their last three matches.

Stour scored four tries in this encounter, but once again it was the boot of Rickie Aley that guided South Leicester to a positive result

The visitors led this encounter 19-10 at the break following tries from Robbie Forbes, George Morgan and Charlie Jeavons-Fellows, with Adam Johnson responding for South.

Aley landed a penalty after the restart and his side then went in front as Adam Nunney scooted over.

The South fly-half nudged his side further ahead thanks to another three points, but Stourbridge were able to steal a share of the spoils when Jack Lea’s late try was converted by Forbes.

Sedgley Park remain on the coattails of the top three as they secured an emphatic home win against Blaydon.

Sedge are now just a point behind the top two and Stourbridge as Matt Bebbington’s side clinched their third victory on the spin.

Blaydon were left facing an uphill task when they trailed 26-0 at half-time with Callum McShane (2), Matt Riley and Jamie Harrison all crashing over for the hosts.

Blaydon did spark into life after the break as Mat Thompson, Andy Miller and Dave Kilpatrick all crossed to cut Sedge’s lead to just five points, but the Manchester based club went over for further scores through Callum Chapman and Ben Lloyd to wrap up the win.

Rob Lenderyou did score a bonus-point try for Blaydon, but a disappointing first half display cost Ally Hogg’s side dearly.

Sale FC eased to their fifth victory in a row as they beat National Two North strugglers Wharfedale to leave the Yorkshire side nine points adrift of safety heading into December.

Chester ended Sheffield Tigers’ five game winning streak and secured their second away win of the campaign as they fought back to edge an excellent battle at Dore Moor.

Ed Simmons’s try had given Sheffield Tigers a seven-point lead during the first half before David Ford replied with a close range score of his own to make the game level at 10-10 at half-time.

James Robins, who had earlier landed a penalty, slotted over the conversion and the Chester fly-half was on hand ultimately seal the victory from the tee in the second period, but the Cheshire side were left hanging on, especially when Frank Wagg had a try disallowed right at death.

Davey started and ended the scoring to earn a bonus-point win with Field’s other try coming via Ben Morrill, but they were made to work hard for their latest victory.

The visitors had led at half-time, but scores from Devon Constant, Alex Wilcockson and Ollie Tapscott kept the Lions in the hunt throughout.

However, the excellent kicking of Davey and some solid defence helped Gareth Lewis’ men over the line.