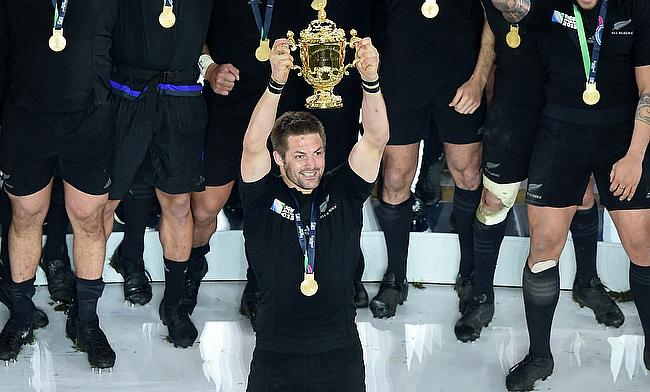 The 34-year-old openside flanker has decided to hang up his boots after becoming the first man to lift the Webb Ellis Cup twice by leading the All Blacks to their second successive World Cup triumph last month.

McCaw's retirement had been expected after the All Blacks became the first team in World Cup history to successfully defend their title and he confirmed his decision in Wellington on Thursday - the day after Jonah Lomu's death.

Lomu died at the age of 40 and there was a minute's silence for the former New Zealand wing at the opening of McCaw's press conference.

McCaw, who paid tribute to rugby "legend" Lomu during his farewell announcement, said: "Today, I thought about whether it was the right thing to do this.

"I'm hugely excited about the future. A couple of things I have in mind. I learnt to fly helicopters in 2009 and that's going to be my thing from now. It's something I'm passionate about."

Hansen told allblacks.com: "On behalf of the All Blacks, we want to congratulate Richie on everything he has achieved in his career. All this success couldn't have happened to a better bloke and we wish him all the very best for the future.

"In my opinion, he will go down not only as the greatest All Black of all time, but the greatest captain we have ever had and possibly the greatest player to have ever played the game in the modern era.

"To play 148 Tests is something to be marvelled at on its own, particularly with the physical demands of the position he plays. But the more impressive thing about those 148 games is the quality of the performances he produced. Having been involved in the majority of those Test matches, I can't recall him ever playing a bad game.

"His ability as a leader will be something he will be remembered for. Leadership doesn't come to anyone naturally, it's a learned skill.

"He's been an inspiration to us all. Not only has he enhanced the jersey during his time, but he has left a lasting legacy that will be talked about by many people long after we're all gone. It's been an absolute pleasure to have shared the road with him."

Renowned for his physical turnover work around the breakdown area, McCaw reinvented the role of the openside flanker in modern rugby as he combined brute strength and reading the game with more traditional handling dexterity and defensive skills.

He made his Test debut against Ireland in Lansdowne Road in November 2001 and was named man-of-the-match in New Zealand's 40-29 victory.

He was voted Newcomer of the Year by the International Rugby Players' Association the following year and was named All Blacks captain for the first time in 2004, when regular skipper Tana Umaga was rested .

Having helped New Zealand to a 3-0 series win over the British and Irish Lions in 2005, McCaw was appointed captain in May 2006 at the age of 25 and after 36 Test matches.

He was named IRB International Player of the Year for the first time in 2006 and also won the award in 2009 and 2010 - h is three wins is a record he shares with former All Blacks team-mate Dan Carter.

Tournament favourites New Zealand were eliminated by France at the 2007 World Cup quarter-final stage but McCaw remained as captain and helped them end their 24-year wait for rugby's biggest prize on home soil four years later.

He won his 100th cap in that tournament but decided to stay on for another four years to lead New Zealand's title defence in England.