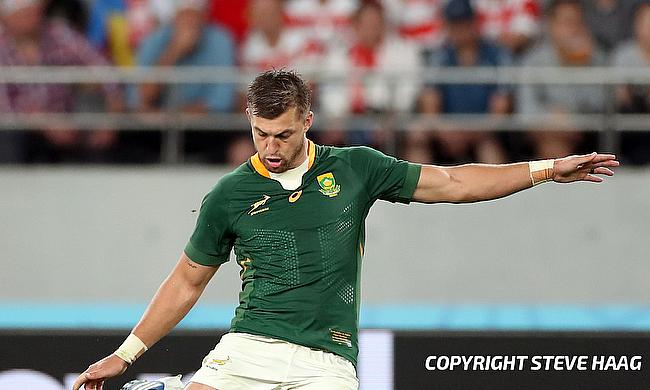 South Africa fly-half Handre Pollard believes his side is the best in the world when it comes to aerial contest.

The Boks style of playing has drawn criticism after they went on to lose back to back matches against Australia followed by a 17-19 defeat against the All Blacks last weekend as they intended to kick the ball high rather than maintaining possession and work in phases.

Nevertheless, Pollard is confident that the world champions will end the tournament on a high as they face the All Blacks in the final round at Cbus Super Stadium on 2nd October.

We have a specific DNA that we believe we are the best at,” said Pollard.

“Of course, it is a bit different to do stuff like that but that was the plan we had for last week’s Test match and the boys stuck to it very well.

“When it comes to the aerial contest, we think we are the best in the world and that is something we work hard on.

“I think we will keep doing it because trust our process and we trust our plan. It is a bit unorthodox I guess, but we believe in it.”

Meanwhile, South Africa loosehead prop Steven Kitshoff echoed Pollard's words and is confident of his team's ability to challenge the All Blacks, who have already claimed the tournament with a round to spare.

“Our preparation has been good,” said Kitshoff.

“We’d like to build on a dominant performance we had last weekend. New Zealand will rock up and they’ll fix the mistakes they made in the set pieces, so we know an incredible challenge lies ahead.

“We know how significant this match is, and we’ll do everything we can to ensure that we pitch up and put on a good display that would make our fans, our country and our teammates proud.

“We back our style of play, our physical presence and our leaders, so we have full confidence in this team, and we believe we can win big matches.”