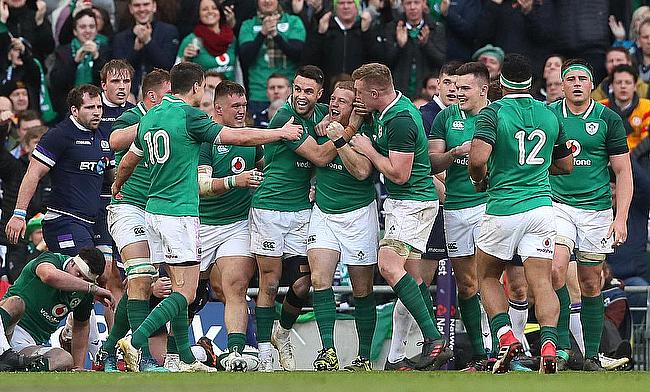 Ireland's 2018 was magic, but can they begin a World Cup year with another storming Six Nations performance?
©PA

Last year, a huge amount of pre-tournament Six Nations analysis was devoted to the England v Ireland match-up in the fifth round, with many pundits convinced it would be the title decider.

By the time the fixture came around, England were out of the running while Ireland were streaks ahead, chasing a Grand Slam that they went on to win.

This year, the two nations meet each other in the first round and, again, many pundits have honed in on this game as the most important (something the Welsh camp is probably quite happy about). It’s not hard to see why: Ireland were probably the most impressive team in the world last year and, if England want to be serious contenders to that claim this year, winning in Dublin is a very good way to start.

But – and it’s a big “but” – winning in Dublin has become one of the toughest tasks in rugby. Just ask New Zealand. Ireland have never lost a home game in the Six Nations under Schmidt, who is about to start his fifth tournament. They didn’t lose a single game at home in 2018.

Back in November, they beat New Zealand without Conor Murray, arguably one of their most important players. They won World Rugby’s 2018 Coach, Player, and Team of the year awards. The Irish provinces have just played 10 games against English sides in the Heineken Champions Cup and won nine of them (the other was a draw).

When you consider those facts, it seems odd that anyone seriously thinks England will win. After all, rugby union is a sport where the strongest team on paper tends to win, especially with home advantage. However, an “on paper” analysis doesn’t really do justice to this England side.

In modern rugby, it’s extremely unlikely that you can expect all your best players to be fit at one time or that you can rely on one single player. That has been made very clear over the past two years, as Billy Vunipola struggled with injuries and England struggled without him. Of course, the injury-arrested career of Manu Tuilagi before him also made that point quite clearly.

Both those players have, at their best, looked like they could take on any team in the world single-handedly. Both of them are now starting for England. The fact that they are not yet currently at their best doesn’t feel like it matters anywhere near as much as it might otherwise, such is the excitement that surrounds the two. If either is fully firing on Saturday, Ireland will have their work cut out.

On top of that, England have an all British & Irish Lion front row. Mako Vunipola, Jamie George, and Kyle Sinckler are all excellent, exciting players in the loose. Add in Elliot Daly, one of the most talented players in world rugby, the talismanic Maro Itoje, and ferocious captain Owen Farrell (all starting British & Irish Lions) and the spine of this team is thoroughly impressive.

Eddie Jones has made it clear that his focus is the Rugby World Cup later this year and has said before (albeit during more successful periods) that this England side cannot be intimidated by playing away from home. In his first year in charge, his team won the Grand Slam with three away games before whitewashing Australia down under. Although their form on the road since then hasn’t met those lofty standards, they know they can win away.

On the other hand, Ireland have their own stars. Anyone who has seen Tadhg Furlong pass will have considered retiring the “front row union” jokes. James Ryan is a young lock who seemingly never tires and will not be afraid to go toe-to-toe with Itoje. Jack Conan, Dan Leavy, Jordi Murphy, and Rhys Ruddock are all missing from this Irish back-row and nobody is batting an eyelid because Peter O’Mahony, Josh van der Flier, CJ Stander and Seán O'Brien (the latter on the bench) could take on anyone. And that’s just the forwards.

There is star quality sprinkled all over this Six Nations, as a quick scan of the team sheets shows. Some of the players, however, are also proving the value of versatility. Jack Nowell isn’t starting as an openside flanker, despite Jones’ musings to the press that he could, but Daly continues at full-back, despite very rarely playing there for his club. Meanwhile, Tuilagi starts at 12, despite both his lack of recent game time there and Jones’ recent assertion that he views the player as a natural 13.

Neither player is in particularly good form, certainly by their own very high standards, and their selection probably tells us a lot about Jones’ plans for England at the Rugby World Cup. There was a great deal of speculation that Mike Brown might have been recalled to deal with the high-ball threat that Ireland pose, but Jones has resisted even putting the Harlequins man on the bench as a safety blanket. Ben Te’o would have started at 12, had he been fit, which Jones admitted in his press conference, so it seems Tuilagi is there as something of a replacement.

As difficult as it has been to predict Jones’ selections, it now seems very plausible that his preferred starting XV is something close to this one: a big pack, Farrell at 10, a ball-carrying inside centre, and Daly at 15. Resisting the temptation to fiddle with his combinations suggests he is willing to risk the result against Ireland in order to fine-tune the overall balance of the team (although he will still be demanding a victory).

In the Irish camp, Schmidt has also selected with a seeming eye on Japan in September. Robbie Henshaw played a great deal ay 15 in his early career and has said he prefers the position but he has only ever played in the centre for Ireland and Leinster. His selection there over Jordan Larmour and Will Addison (Rob Kearney is not fully fit) could simply be down to his defensive superiority but it also suggests that Schmidt is considering the constraints of a 31-man RWC squad. Bundee Aki, who played so well against New Zealand in the autumn, steps in at 12.

There are so many contenders for “who to watch” in this game that it might be better to focus on “what to watch” instead.

England’s troubles in this area were much reported last year. This year, their hopes rest on Tom Curry, one of the best jackals in the Gallagher Premiership, and Mark Wilson, who has been doing good work at the breakdown for a while now at Newcastle Falcons.

Ireland, on the other hand, have based their success on their skill at the breakdown. In O’Mahony, van der Flier, and Stander, they have a world class back-row. In particular, van der Flier’s breakdown threat and the prospect of O’Brien on the bench should give Ireland the edge here.

This is traditionally an area of strength for England, although they lost five lineouts against New Zealand in November – a number that might have been the difference in a one-point game. The selection of George Kruis, a very canny lineout operator, suggests Jones is taking improvement in this area very seriously.

Manu Tuilagi pairs Henry Slade in the centres for England, with Jack Nowell restored to the wing.

Eddie Jones opts for the scoring threat of Chris Ashton over Mike Brown on the bench, strong intent.

No surprise to see George Kruis alongside Maro Itoje, the lineout will be HUGE. pic.twitter.com/BctyyhNU61

However, given that Ireland scored a remarkable 45% of their tries off the lineout in last year’s Six Nations, taking it seriously seems the minimum requirement. Seán Cronin is currently the joint-top try-scorer in the Heineken Champions Cup and has arguably been the best Irish hooker in the loose for years, but his lineout throwing isn’t accurate enough for Schmidt to start him. The Irish Head Coach is clearly not willing to give up his advantage here.

Along with the breakdown and an unfortunately long injury list, discipline was another oft-cited cause of England’s malaise last season. However much they talked about it, the players couldn’t seem to adapt to the refereeing and keep the penalty count down. Ireland, on the other hand, had an iron-tight discipline, rarely conceding double figures. They created more rucks than anyone in the Six Nations while conceding the fewest penalties there. Both sides have very accurate kickers so aberrations are guaranteed to be punished. Disrupting Ireland’s breakdown discipline might be England’s best route to success.

If anything trips Ireland up, it seems likely to be their ability to deal with the pressure of being the favourites. It’s a position they’re not necessarily accustomed to. On the other hand, they went into their two biggest matches of last year – England at Twickenham and New Zealand in Dublin – as the favourites and it didn’t seem to get in the way. Moreover, 13 of the 23 matchday squad were part of Leinster’s double-winning side of last season, where they also didn’t seem troubled by the favourites tag.

Jones highlighted England’s mental strength as an issue to be resolved before he started as Head Coach, with mixed results since. Too often, they have relied on Dylan Hartley to keep a cool head. In his absence, the focus will fall on Farrell: one of the best fly-halves in the world and the unquestioned true leader of this side. He is also, however, a player who is regularly cautioned by referees as captain, including twice in recent games for Saracens. If he can keep his cool, it will go a long way to helping England’s cause.

On paper, then, this is Ireland’s game to lose. They are at home, ranked higher, have a more settled run behind them, and edge all the individual contests-within-the-game. But England have more than enough about them to prove that an advantage on paper means nothing, if they can keep their heads. It’s no surprise this game is so eagerly anticipated by fans and pundits alike: it could be something really special.