George North: Wales' quick game suits me down to ground 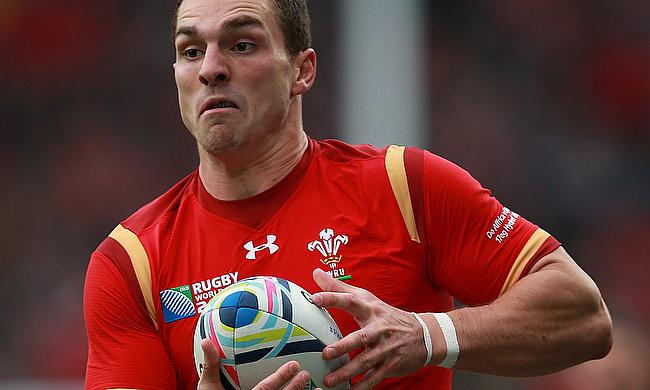 George North is relishing the prospect of playing running rugby with Wales after limited try-scoring opportunities at Northampton this season.

Wales have won the Grand Slam in the two most recent post-World Cup tournaments, in 2008 and 2012, and face a fierce test in Sunday's opening RBS 6 Nations contest with Ireland in Dublin.

North is a key figure for Wales and expects to benefit from their expansive style after admitting to being frustrated by Saints' tighter game-plan.

"For me it would be nice to step away from Northampton now, get a different stimulus," North said.

"(Wales) want to play a quick game and an open game and that suits me down to the ground.

"I want to be on the wing, I want to have that space to run at people and have the opportunity, rather than carrying straight into a (defensive) wall.

"Sometimes you need to be that guy, which I don't mind doing.

"But when you've got the opportunity to have 50 metres of space and you can open the taps, there's nothing better in the world than doing that."

North has just three tries for Northampton this season, the first coming on Boxing Day and the most recent at former club Scarlets as Saints advanced to the knockout stages of the European Champions Cup.

"It's difficult, because the way we're playing at the club isn't really helping my game," North said.

"I prefer a bit more of an open game, bit more broken play and freedom."

Wales head coach Warren Gatland and his assistant Rob Howley give North a target for number of touches of the ball he has in each game.

"Always more is the key. Always one more," the 23-year-old said.

And North hopes to get on the ball and feel the benefits of his World Cup conditioning when the Six Nations starts in earnest this weekend.

"Normally going into Six Nations you've had a few more games and you've been battered around a bit and not had as clean a pre-season," North added.

"To go into a Six Nations on the back of the condition in the World Cup is going to benefit everyone.

"We've got great history in the Six Nations post-World Cup year. Hopefully we can continue that.

"Why not start in Dublin? It's going to be a big one.

"We all know what Ireland are like when they get together and they get playing well. They're a massive force to stop."

Wales next play Scotland and France in successive home games before a trip to England and concluding home contest with Italy.

North could enjoy a memorable season once again and was asked if he is considering extending the campaign by playing sevens at the Rio Olympics.

The British and Irish Lions wing hopes to be in Rio supporting his girlfriend - the track cyclist Becky James - but is yet to consider competing himself after an action-packed career to date, not to mention a series of worrying concussion episodes last year.

"I'll take my boots with me. (But) for me it would be: World Cup pre-season, World Cup, full season, Six Nations, full season.

"I don't even know my schedule for next week, let alone for Rio, so let's see."