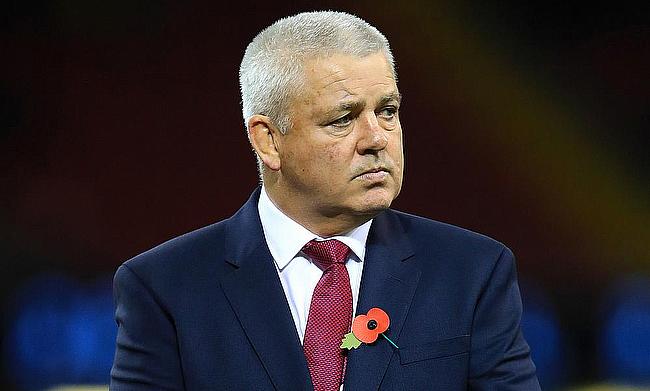 It is an image, eight months out from a tour to the southern hemisphere, which we have become accustomed to as the former Wales head coach prepares to lead the Lions into battle for a third time.

And whilst the mandatory launch of the new jersey and clothing range maintained its usual place in the calendar (the 2017 unveiling happening at a similar time in the year), you would think preparations for next summer’s visit to South Africa might have been anything but normal.

However, when asked how well his plans were going for the tour during a global pandemic, Gatland said: “The planning has gone incredibly well. We are probably a long way ahead of where we were in the last tour.”

Like most sporting events in the Covid-19 era, next year’s series in South Africa wasn’t set in stone but back in July, the Lions confirmed their schedule for their shortest ever tour which contains just two midweek fixtures and a home clash with Japan at BT Murrayfield on June 26th.

The Lions last met the Springboks back in 2009 when South Africa were world champions and Gatland’s squad will be faced with the same challenge again next summer.

With a chunk of rugby falling by the wayside due to the lockdown period, Gatland now has eight months to pull everything together. “It doesn’t come any harder than facing the world champions in their own back yard, but we’re excited.”

A priority on his checklist will be to firm up his coaching team. Rob Howley, Steve Borthwick, Andy Farrell, Neil Jenkins and Graham Rowntree were all part of Gatland’s backroom staff three years ago in New Zealand and the Lions boss admitted he should have this element of the job finalised in the coming weeks.

Former England head coach Stuart Lancaster has played an integral part in Leinster’s success since joining the Irish province in 2016 and his name has cropped up when discussing Gatland’s plans for South Africa whilst the fervour surrounding Exeter Chiefs’ double winning Director of Rugby, Rob Baxter, won’t be petering out any time soon.

Scotland’s Gregor Townsend was unavailable to join the Lions on their last tour after initially saying yes to the coaching opportunity, but Gatland suggested he wasn’t planning on veering too far away from his tried and tested methods.

"We are taking them boys to the hurt arena this weekend!"

Andy Farrell delivers an incredible speech ahead of the third test #LionsNZ2017 pic.twitter.com/DhwO8oGMgl

He has also been given permission to speak to head coaches from home unions about joining the tour, which could see the likes of Farrell link up with Gatland again for his third Lions series.

“The thing is when you are picking your coaching team, because you have that limited preparation time and because you are bringing a new group of players together, having that continuity with people who have been there before makes a huge difference, but you do want some new faces as well and I think that is important.

“I have got a huge amount of regard for Andy and his leadership and what he brings to a game and a team. He understands winning and winning environments and he is very smart. He is definitely one of the guys you are looking for from a continuity perspective.

“I have had a massive amount of approaches from individual coaches and agents putting people forward and it is just a matter of going through that list and there is potentially one or two spots that I am considering, but if we can secure some of the people that were there in the past, that would be our preference.”

Whether it be in the lead up to a World Cup or a Lions tour, the preceding Six Nations Championship always has a telling impact when it comes to squad selection.

Despite the changes in the rugby calendar due to Covid-19, the 2021 edition of the tournament is still set to go ahead across February and March which will be the final opportunity for many who dream of pulling on the famous red jersey.

Gatland, of course, will be keeping an eye on the form of potential tourists during the Autumn Nations Cup as England, Ireland, Scotland and Wales look to end a disrupted year on a positive note, but the Lions boss knows how significant next spring will be.

“You kind of look at the November games because it is not competition and sometimes teams and coaches are looking at different combinations because that is the build-up towards the Six Nations,” added Gatland. “That is where it really matters.

“Teams look to perform at home and more importantly for me, it is more often about how you perform away from home because that is what you have to do on tour so a big yardstick for selecting the Lions is definitely the Six Nations. For players playing in the autumn, it is a chance for them to hit some form in order for us to take notice of them and to see how their form progresses in the Six Nations.”

For the tour of New Zealand three years ago, the Lions initially selected the highest proportion of their players from England in their 41-man squad.

Gatland indicated the size of the squad which he will take to South Africa will be reduced to “35 or 36” because of the limited number of midweek fixtures but he may be without some of Eddie Jones’ men for their opening warm-up match against Japan.

The Lions first made this point in NZ four years ago.

Are the England players going to accept a situation that could cost them a place on the Lions tour?

Warren Gatland: “The players have a voice in terms of what they want." https://t.co/LH2fo3caT1

Gatland has called on the players’ union to help break the deadlock between the Lions and Premiership Rugby as their meeting with the Blossoms takes place a week before the start of the international window and it also clashes with the Premiership final.

As things stand, English clubs never release players outside of the window and this could cause Gatland some selection problems not only for their game with Japan, but also for Lions training camps.

“It’s not 100% final at the moment (that players will not be released), there are still some negotiations that will go on between now and then, but if England have a great Six Nations it could mean that a third of the players (in the Lions squad) are missing for the Japan game and a camp in Wales the week before,” Gatland said.”

“We want to take the best players on tour, but the reality is that it could affect selection. Hopefully common sense prevails. To go on a Lions tour and the interest it creates from within and outside the sport, you can come back a superstar. Maybe the players need to voice their opinion on that, it would be pretty powerful I think.”

A number of England players may well be in the frame to captain the Lions in South Africa. Sam Warburton skippered the team on the last two tours to Australia and New Zealand respectively, but it will be a new name who will be carrying out ‘BIL’ the mascot when they visit venues such as Johannesburg and Cape Town next summer.

Second-row Maro Itoje has been talked up by the aforementioned Warburton to step into his shoes, but Gatland admitted the decision to select his captain will come later in the process.

On Itoje, the Lions head coach said: “He is just maturing as a player. When he first burst onto the scene, he was in to everything. He was probably over-playing and using energy that he didn’t need to be and hitting rucks that were lost causes!

“He is obviously an outstanding player. He is a very articulate young man and he carries himself incredibly well. He is proud of his roots, his upbringing and what he has achieved so he is one of many that could potentially be a candidate.

“That selection will be made very late in the piece when we pick the squad and we will decide as a collective group of coaches who we think is the best person to do the job.”

Warren Gatland was speaking on behalf of Canterbury at the launch of the British & Irish Lions Pro jersey available at Canterbury.com