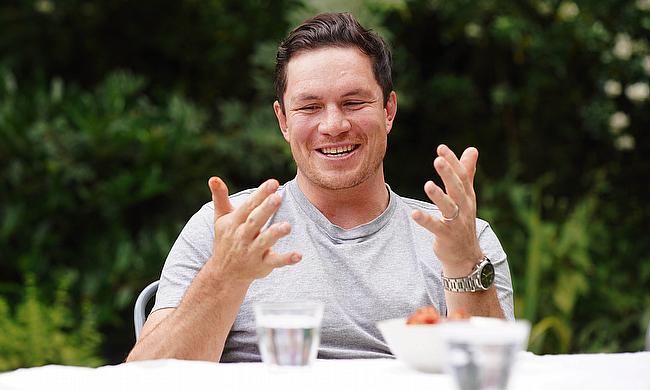 Ahead of the first Lions Test, Matt Dawson was taking part in a cooking challenge with former Springbok Francois Louw
©NOW TV and Fever

Matt Dawson Exclusive: You are thinking ‘this is the biggest game of my life’
Maro Itoje inspired by Alun Wyn Jones' recovery
Warren Gatland unhappy over leaked team news
Gatland’s Lions looking to be ‘on the money’ in first Springboks Test

Francois Louw’s career came to a close in perhaps the most perfect way possible with the former Bath, Western Province and Stormers flanker lifting the World Cup in Yokohama.

Two years on from South Africa's triumph over England, Louw will now be a spectator as his former international teammates take on the British and Irish Lions.

So far, the tour has been marred by disruption for both sides, with the Lions having had players in and out of isolation whilst the Springboks have had Covid-19 problems in their camp virtually from the outset of their time together.

Up until the squad announcement on Tuesday, it was unsure whether talismanic captain Siya Kolisi would be fit enough to lead the side. Thankfully for Rassie Erasmus and Jacques Nienaber, the 30-year-old has won that particular race and now the main question is whether or not the Boks have had the requisite preparation for the Lions.

For example, Kolisi has had just the one hit out this month - against Georgia in a 40-9 win - whilst their second Test against the Tier 2 nation was called off.

The world champions have been able to play some of their star names under the South Africa 'A' banner against both the Lions and the Blue Bulls, but regardless of this disruption, Louw feels as though there is no real excuse for the players or the Springboks as a whole to not perform well over the next three weeks.

“I think the reality is that they haven’t played a Test since the World Cup final,” Louw told TRU. “That is well over a year ago and it is going to be a massive challenge in terms of guys getting themselves mentally ready, let alone physically, having not had those in between games to really get your form right.

“Perhaps not to the same extent, but everyone has been exposed to a lot of disruption, new ways of training and forming bubbles. Everyone has got to deal with it. I think if you keep using Covid as a crutch, you are heading for ultimate failure when it comes to sport.

Playing against the Lions is something that Louw never quite managed to do in his career as the 36-year-old was injured in 2009, but there are plenty present in Saturday’s Test squad who were integral parts of South Africa’s third World Cup win.

Eleven of the Springboks XV for their opener against the Lions were all starters in the World Cup final, the backline entirely the same as that day in Japan. With Duane Vermeulen injured, the primary question being posed prior to squad selection was who would be playing at No.8, the likes of Jasper Wiese touted as a possible replacement.

Instead, it is 25-year-old Kwagga Smith who takes that shirt. The 5’11” back-row may not have been the first choice for many, but thanks to his durability, leadership qualities and threat at the breakdown, Smith will no doubt take the opportunity presented to him with both hands.

“I wouldn’t say there has been a change of guard, a few guys have moved on, myself included, and there are some youngsters coming through,” Louw said. “The guys who have been youngsters in the past have stepped into senior roles in order to pull the side together and to deliver which I think is going to be the biggest challenge.

Ahead of the @lionsofficial's test battles with @Springboks, we got rugby legends @matt9dawson & @FloLouw to face off in a series of their own ??

3 challenges. 1 winner. This is The Great Big Braai Off. ??????#LionsOnNOW pic.twitter.com/bODiz7jett

“From an individual’s perspective, Duane Vermeulen is a stalwart of South African rugby, but I have been personally impressed by Jasper Wiese who has been playing his rugby in England. I think they are like for like in terms of playing style. He is young and hungry, but Test rugby is different. There is no room for error.

“A lot of it is to do with whether the team can compartmentalise everything that has happened over the last year and gel as a new team, taking what we had in Japan and move forward as a new team, face this challenge and deliver. It sounds a bit airy, but I think that is the biggest challenge.”

What is particularly noticeable about this South Africa team is the number of players that ply their trade outside of the country. The likes of Eben Etzebeth, Franco Mostert, Smith, Faf de Klerk, Handre Pollard, Damian de Allende, Cheslin Kolbe and Willie le Roux all play their club rugby in France, Japan, England and Ireland, respectively.

On the bench, Malcolm Marx, Lood de Jager, Rynhardt Elstadt and Elton Jantjies fall under the same bracket and Louw sees similarities to his own career, the majority of his Test caps being won during his time at Bath.

“My path was similar,” Louw said. “Whether or not it is just getting exposed to a new perspective, not just in rugby or life because I think the best people and best characters are solid people and they have got a balance and perspective on life.

“They are amazing athletes because you get to a level, and everyone is good. Everyone is strong. Everyone is fit. Those are controllables because anyone can be strong and fit. You have just got to do the work. There is a baseline of skill that is super high, and they all have that. It is what sets certain players apart and maybe guys playing in different environments.

“Playing with foreign players from Japan, France, England and Wales, it gives you a different look and a different feel to the game and perhaps reignites something that you already know and that you just haven’t known how to tap into.

“It is amazing to see what Cheslin and Rynhardt have done at Toulouse, and Jasper, I didn’t really know of him until he came to the UK, and he has owned that spot and deservedly has a place with the Springboks.

“In Japan, I have never played rugby over there, but I have only ever heard amazing things from guys who play their club rugby over there. Perhaps it is just moving out of your comfort zone, which I think in any industry is sometimes necessary.”

As much as Louw was never able to take on the Lions, he was present in South Africa in 2009 whilst on duty for Western Province. Of course, this year has been much different with fans unable to attend the games or even fly into South Africa as a result of the global pandemic plus, there is added unease due to the riots in the country.

It was all sparked by the imprisonment of former President Jacob Zuma at the start of this month. Now, over 2,500 people having been arrested and with 215 dead, it is hoped that positive results for the Boks can unite the country as it did in 2019 after the team won the World Cup.

“I think we are always looking for something positive to grasp onto and sport does that,” Louw said. “It doesn’t matter what sport that is, to be able to find a release, to find hope, that is huge. As people and as South Africans, but also as global citizens, you want to reach out and support something you can get behind and see success achieved.

“I know that I will be looking towards these fixtures, looking forward to having the Lions playing their Tests in South Africa, on South African soil, which is super exciting.”

The British and Irish Lions Tour of South Africa is available to stream on Sky Sports with a NOW Sports Membership, currently priced on offer at £25 a month for three months. Offer ends 24/07/2021