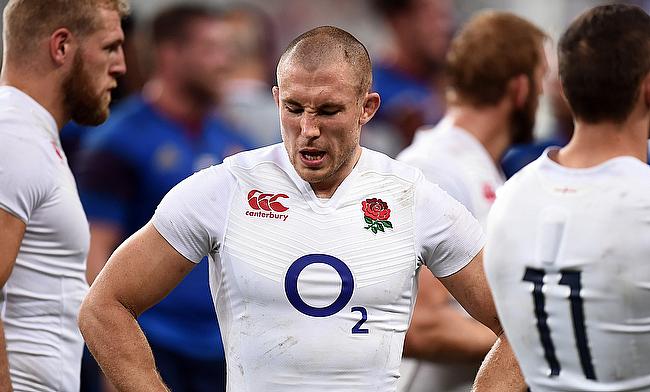 England's preparations for the home World Cup suffered a setback after they slumped to a 25-20 defeat by France that at least featured a stirring late fightback.

Danny Cipriani stepped off the bench to cross and Jonathan Joseph also touched down in a lively finish, but England's tries in an error-strewn clash in Paris merely masked the extent of their inferiority for the previous 70 minutes.

A first-choice England pack endured a torrid evening at the hands of Les Bleus just seven days after being out-muscled, but not out-scored, in the 19-14 victory over the same foes at Twickenham.

The set-piece was once again exposed, with referee Jaco Peyper repeatedly penalising the scrum, while the throwing of Tom Youngs and replacement hooker Jamie George contributed to the mess at the line-out.

The second of two matches against France - Ireland's visit to Twickenham on September 5 completes England's schedule of warm-up fixtures - was billed as an audition for Luther Burrell to secure his World Cup place, but it was a frustrating day for the inside centre.

Starved of quality possession, England's back play was ragged and error-strewn and until the late flourish they had struggled in a match that had pre-season stamped all over it.

Burrell's first involvement was to concede a penalty for not rolling away and Scott Spedding landed the three points from inside his own half.

France were aided when George Ford sent the restart straight into touch and England continued to come under pressure, infringing again when Dan Cole entered the ruck from the wrong side and this time Michalak was on target.

Worryingly for the World Cup hosts, they had barely entered the French half and continued to be forced back.

A chip from scrum-half Sebastien Tillous-Borde was expertly dealt with by Mike Brown, who plucked the ball from the air beneath his own posts knowing only a perfect catch would be enough to foil Huget.

Michalak kicked a second penalty and missed a third attempt and France entered the second quarter 9-0 ahead.

Problems continued to mount for England as a backs move broke down following a knock-on by Brown before their scrum was demolished, and from the resulting penalty Michalak put more daylight between the teams.

A first foray into the French 22 ended with three points for Ford, but the Bath fly-half then fell well short with a long-range attempt as a scruffy first half continued.

Billy Vunipola escaped a yellow card for a high tackle on Huget but the penalties were still accumulating and once more Michalak found his mark.

England ended the half with a flourish and although they were knocked back by some thumping French tackles, Ford sent a kick between the uprights to give them some reward.

The good work was undone in a flash, however, as Michalak darted forward and cleverly sent Huget through a large gap, with Robshaw arriving too late to make the covering tackle.

Huget still had work to do but the wing expertly rounded Brown and evaded Nowell to touch down under the posts with Michalak converting.

Hopes of victory were evaporating fast and just to ram the point home Michalak landed a fifth penalty.

A big gap appeared in the French defence in the 72nd minute and England pounced, Cipriani sliding between two tacklers and over the whitewash with Ford converting.

England were finishing strongly and they engineered a second try in the corner when Brown sent a racing Joseph over, before the visitors came up short with one last assault.