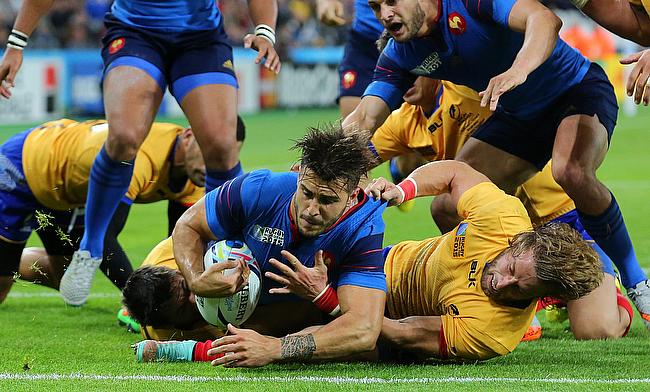 Two tries from Sofiane Guitoune helped France to a battling 38-11 victory over Romania as the 2011 World Cup finalists moved above Ireland to the top of Pool D.

Romania were far from outplayed in their opening match of the tournament but tries in each half from Guitoune and three more from Yannick Nyanga, Wesley Fofana, and Gael Fickou gave France the bonus-point win.

Fofana, one of 13 changes made after the opening win over Italy, was particularly impressive but the French will have to improve overall if they are to overcome more ruthless opposition.

This was the first of five World Cup fixtures being played at the Olympic Stadium and the 55,000-seater arena made for an excellent venue, with both sets of supporters contributing to a buoyant atmosphere throughout.

Romania are yet to make it beyond the pool stages in seven attempts but they showed enough power and purpose here to suggest they can trouble both Italy and Ireland's bid to reach the quarter-finals.

France's early pressure was rewarded in the eighth minute when Danut Dumbrava was adjudged to be offside and scrum-half Morgan Parra slotted away the resulting penalty.

French fans had booed the team's decision to kick rather than run for the try and it was to the delight of the Romanian supporters that their side were more ambitious when they won a penalty at other end soon after.

It almost paid dividends too, as a miss pass saw Romania's Florin Vlaicu dive over the line but the try was ruled out after the TMO had shown Bernard Le Roux to have held his opponent up.

An offside in the build-up did, however, allow Vlaicu to level with his boot and he should then have put his side ahead in the 26th minute, but this time skewed a fairly simple kick wide.

The error proved costly as Romanian prop Paulica Ion was sent to the sin bin for some cynical fouling in the maul and France took full advantage, scoring two tries in three minutes.

First, Guitoune did brilliantly to reach down in the corner while being tackled by Florin Surugiu and then Nyanga finished off an excellent team move to add a second, both of which Parra converted for a 17-3 lead.

Vlaicu cut the deficit to 11 on the stroke of half-time before television cameras showed France head coach Philippe Saint Andre ripping into his players during the interval.

The favourites had been inferior in possession, territory and turnovers in the opening 40, and little changed before the hour-mark as Romania continued to hold their own.

Just as in the first period, however, Les Bleus saved their best until the end as two more quick-fire tries put the contest out of Romania's reach.

Guitoune notched his second of the game in the 66th minute with another clinical finish before Fofana powered through two defenders to touch down again three minutes later.

Parra and Rory Kockott added the extras but Romania notched a late consolation when Valentin Ursache was driven over after a line-out.

It was the French, however, who had the last word as a well-worked line-out allowed Fickou to weave his way through and Kockott converted again to put some polish on the victory.