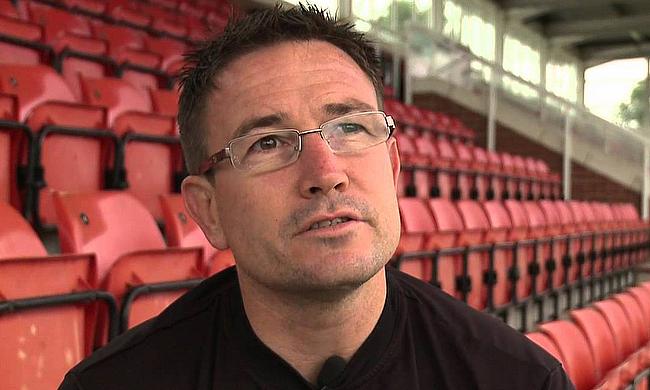 Mike Friday: USA at RWC
USA 7s and their rise to the top
USA Rugby: a Defining 2015

Talking Rugby Union caught up with USA 7s Head Coach Mike Friday to discuss the upcoming sevens season which gets underway in Dubai on December 4th.

Mike Friday may well be one of the most focused men in rugby sevens. Despite flying from England to Dubai and swapping the wintery and bleak conditions of south-east London for the sunshine of the UAE, the United States Head Coach remains cool and concentrated on the task that faces his side as the HSBC World Rugby Sevens Series kicks off on Friday.

The USA arrive at the first round of the series off the back of their most successful rugby sevens season in their history. They won their first ever World Series event in London back in May of this year and also qualified for the Olympic Games in July. They were certainly aims ticked off the list for Friday and his side, but what’s next for the USA?

“We want to be consistent in our performances and be a team that is feared by all rugby sevens nations on the circuit,” he said. “We want to be competing for cups and our aim is to try and break into the top four and be talked about in the same manner as the Tier One nations are.

“We are under no illusion about how big a task that is as everyone who finished below us last season will want to beat us and we have to be at the top of our game to ensure we aren’t beaten. Added to that, we also want to be winning our games against the super Tier One Nations of Fiji, South Africa, New Zealand, Australia and England.”

The USA squad has only been together 13 days which means they may find it tough out in Dubai with the likes of New Zealand in their group. They are also joined by France and Portugal in Pool C with the Friday’s side beginning their new campaign against the Portuguese.

And Friday feels his team will take a while to get back into their rhythm but all thoughts are on their series opener.

“We are certainly going to be undercooked,” added Friday. “We have had to deal with the reintegration of our World Cup players, but that is the price we paid for a successful season last year.

“The boys are having to realise that last season is now in the past and we have to earn it all again and that we cannot expect it to happen again. We saw the players grow and evolve as they started to fulfil their potential last season and that sacrifice and hard work must happen again this campaign.”

And that hard work and attitude will need to be there throughout this season for the USA as awaiting them at the end of the campaign are Olympic Games in Rio.

There is no doubt that Friday and his side will be fully focused on each series event throughout this year, but they will be thinking about Brazil in every single game they play.

For Friday though, it’s not just about playing on the world’s biggest stage. Since he took charge of USA 7s, one of his main aims has been to keep increasing the popularity of rugby in the States and he feels that when his side step out in South America next summer, it could be a ‘game changer’ for sport in the US.

“We are very excited about the season,” he said. “It has been a long pre-season for the boys so they are climbing walls just to pull on the shirt and represent the country.

“It’s hugely compounded with the Olympics at the end of the season to aim for and adds and extra focus for boys. Being an Olympian in the USA is huge and potentially life changing if they become a successful. So for rugby in the USA, it could be a huge game changed and the sleeping giant could finally awake as every continent in the world will be watching the rugby in Rio 2016.

“For now, we won’t look past Portugal in Dubai as we need to focus on performing in that game and doing the simple things accurately and efficiently. We will then focus on game two in the same away and repeat.

“I have high expectations and standards will be disappointed if the boys do not do themselves justice and the people of the USA we represent.”