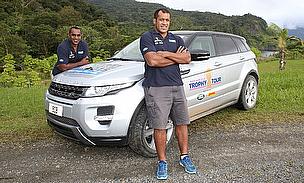 Following Fiji’s recent qualification for Rugby World Cup 2015, Land Rover caught up with Fijian former internationals and Rugby World Cup stars Viliame Satala and Alifereti Doviverata. ‘Bill’ Satala lit up the 1999 tournament with his electric side step and physical game, while ‘Dovi’ was a powerful forward who lead from the front as the Fijian captain in 2003.

Speaking on the task ahead of the national side following their defeat of The Cook Islands to take the Oceania 1 position in Pool A at next year’s Rugby World Cup in England, Satala said:

“I think [the Rugby World Cup] is going to be a big task for Fiji but you can't count us out. They can perform when they play on their day.

“Experience-wise, I think the boys that are playing in the current team are playing in the top competitions. Nemani Nadolo has been playing well for the Crusaders in the Super XV and Metuisela Talebula is the top scorer in France [in the Top 14] so I think they're going to be impressive in next year's Rugby World Cup.”

Dovi agreed that the side will face some stiff competition from the likes of Australia, England and Wales but this should be driving factor for the team:

“I think it's always exciting to play the top teams because it brings out the best of you, so the onus is on the boys to perform. I think the forwards have to rise up to the occasion to be able to give quality ball to the backs.”

The pair were speaking as part of Land Rover’s partnership with the Rugby World Cup Trophy Tour, the third leg of which saw the Webb Ellis Cup driven across the whole of Fiji, visiting remote communities including Naqali and Naivuci. Land Rover has pledged to take the Webb Ellis Cup to places it has never been to help build excitement for Rugby World Cup 2015 around the world. Speaking of the passion the country has for rugby Satala said:

“Rugby is a huge sport here in Fiji, so it's fantastic for so many people to be able to see the Webb Ellis Cup, while it's here on the Rugby World Cup Trophy Tour.”

Dovi added: “This is a very rugby-crazy nation, so we've seen in all the villages they've been excited about the Rugby World Cup and when the tournament happens it will get the nation together.”

Capped 29 times for Fiji, Viliame ‘Bill’ Satala was a dynamic, hard running and hard hitting centre that lit up Rugby World Cup 1999 with an electric side-step and a physicality to his game. A record of 16 tries in 29 matches from 1999, when he played in all of Fiji’s four Rugby World Cup matches, Satala also excelled at the seven a-side version of the game, winning the Hong Kong Sevens in the same year. He helped his country to a Commonwealth Games Silver Medal at the 2002 Games in Manchester.

An abrasive, powerful forward, Alifereti Doviverata was first capped for Fiji in 1999, going onto win 42 caps for his country. Having played for the nation’s Sevens team he was picked in the squad for Rugby World Cup 1999 at XVs and became a regular fixture in the starting team through to being selected to captain the side on the November 2001 tour of Europe. Cementing this position he led the side in Rugby World Cup 2003 and while the side narrowly missed out on qualification to the knock-out stages, they recorded strong wins over Japan and the USA.