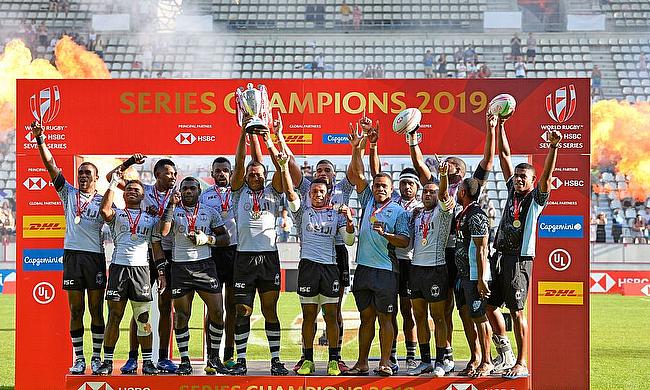 Fiji resisted a second-half fightback from New Zealand 7s to register a 35-24 win in the final of the Paris Sevens to claim the World Rugby Sevens Series for the fourth time.

Fiji's triumph in Paris followed wins in Cape Town, Hamilton, Hong Kong and London legs as they finished at the top of the overall standings with 186 points while USA finished second with 177 points followed by New Zealand, South Africa and England at third, fourth and fifth respectively.

Napolioni Bolaca started the proceedings early for Fiji with a first minute try followed by further tries from Meli Derenalagi (3'), Aminiasi Tuimaba (4') and Jerry Tuwai (8'). Bolaca also converted all the four tries as Fiji raced to 28 points before the break while New Zealand's solitary response came through a try from Jona Nareki and a conversion from Dylan Collier.

Bolaca got Fiji off the block early with a try in the second half - also his second in the game that took their lead to 28 points but a double from Regan Ware (12' and 16') and a touchdown from Collier (13') gave the Pacific Island side a scare which they managed to hold off to complete a nine point win.

"Last year we came here and we were further in front but we did not have the wherewithal to finish it off. That was quite painful," said head coach Gareth Baber.

"I thought that the back end of the season, carrying on from Hong Kong with Singapore, London last week and to round it off as we did, is pretty special. It’s all credit to everybody back home in Fiji, everybody who has supported us and kept patient. But, most of all to the staff and the quality outfit that we have playing for us."

South Africa finished third in Paris 7s with a 24-7 win over USA in the bronze final while Canada defated Ireland 28-12 in Challenge Final.