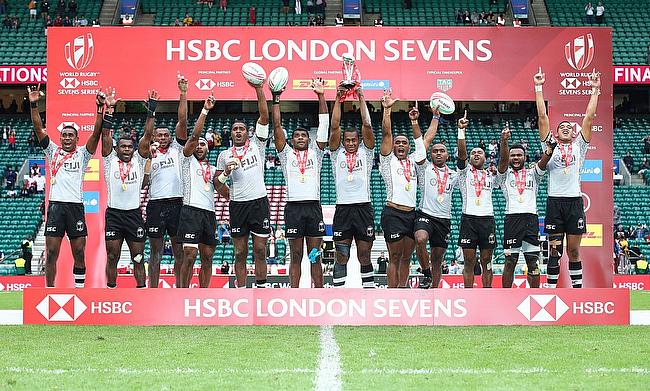 Fiji have claimed the top standing in the ongoing HSBC Men's World Rugby Sevens Series after they went on to beat Australia 7-43 in the final to claim the London 7s.

Gareth Baber's men had a fabulous start to the game with DHL Impact Player Vilimoni Botitu crossing over in the third minute and Aminiasi Tuimaba followed the suit a minute later.

Tuimaba looked in ominous form as he scored back to back tries in the 8th and 10th minute that was separated by a touchdown from Joe Pincus in the 9th minute which remained the only try for Australia in the game.

The second half looked no different as Fiji extended their domination as Josua Vakurunabili dotted down in the 12th minute and was followed by a double from Alasio Naduva in the 11th and 14th minute to complete a convincing 7-43 win.

"Obviously we found it tough in the first four or five minutes when Australia put something in – we knew they're a good side and a tough side to play against – so we knew that we needed to get some scores on the board, and we did it with some style," said Baber.

HSBC Player of the Final Meli Derenalagi added: "We had lots of work-ons from day one so we tried to improve on day two and our main focus was to come and win. All the supporters from around the world uplift us and motivate us to come and give our best."

Fiji had earlier defeated Ireland and USA in the quarter-final and the semi-final respectively while Australia went past South Africa and France to reach the final.

Meanwhile, Samoa went on to win the Challenge after beating Scotland 26-17 in the final while England had a tough round after managing just two points from the London 7s. USA secured the third place while France and New Zealand are at fourth and fifth place respectively.

The win in the London leg has taken Fiji to the top place in the overall standings with 164 points while USA are at second with 162 points. New Zealand, who gained an Olympic qualification next year are at third with 143 points while South Africa and England managed 131 and 109 points respectively this season.