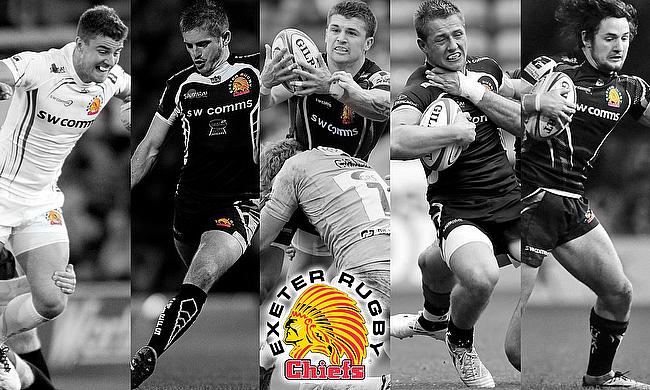 The rise of Exeter Chiefs over the past six seasons has been one of the most enjoyable stories of the professional rugby era and it almost culminated in a fairy tale ending last season when they made it all the way to the Aviva Premiership final.

They ultimately succumbed to a dominant Saracens side at Twickenham but expectations rose for the club as a result of that 2015/16 season and they are no longer the plucky underdog – not that they have been for some time - as the 2016/17 season begins to take shape.

In addition to their trip to the final, not to mention an encouraging European campaign also raising expectations, the arrival of highly-touted centre Ollie Devoto had fans salivating at how he might gel with the midfield weapons the club already had in place, such as Gareth Steenson, Henry Slade, Sam Hill and Michele Campagnaro.

Experimentation with combinations in the midfield was inevitable this season, as Rob Baxter and his coaching staff have been trying to ascertain their options and work out which players complement each other best, as well as providing balance for the rest of the team around them.

The Chiefs started with a trip to the Ricoh Arena to take on Wasps and welcomed their 2015/16 nemeses, Saracens, to Sandy Park. For both games Baxter turned to a new-look midfield, starting Slade at 10, keeping favoured inside centre from last season Hill at 12 and former Bath man Devoto was plugged in at 13.

Exeter went on to lose both games and whilst the midfield unit didn’t look bad in either game, it didn’t look to have great chemistry, either. Slade wasn’t able to offer the same control at fly-half, albeit with less of a foundation from the pack, that Steenson delivered so consistently last season.

There was a predictability about Exeter last season, with their reliance on the driving lineout at the forefront of their success, and the keenness to develop Slade as their fly-half speaks to a goal of trying to diversify the attack of the Chiefs and make them a more versatile team with ball in hand. As good as Exeter were in the previous campaign, directors of rugby and defence coaches have had an entire offseason to work them out and Exeter’s desire to evolve is understandable, even if it meant benching the reliable Steenson.

After an 0-2 start, however, Exeter reverted to type somewhat in their third game of the season, moving Steenson into 10, shifting Slade out to 12 and keeping Devoto at outside centre. Exeter won the game but again, the midfield failed to click, prompting a switch for their fourth game of the season.

Hill replaced Devoto at outside centre against Bristol in round four and the chemistry between he and Slade was clear, with Steenson controlling the game superbly from fly-half. Hill was the powerful carrier on Slade’s outside shoulder that brought the best out of the inside centre. Slade was free to play on the gain line, either running himself or putting Hill through holes in the defence, as well as being able to use Hill as a decoy and bring in runners from deep, such as Lachie Turner and Olly Woodburn.

It was comfortably the most polished performance yet this season from the Exeter midfield, admittedly against the weakest opposition they have faced so far, but still went a long way to establishing the axis of Steenson-Slade-Hill as the club’s most effective midfield.

The onus shifted on to Devoto and the as yet unused Campagnaro to force their way into Baxter’s thoughts and show the coach that Exeter are ready to become a more varied attacking proposition.

The changes were rung once again this past weekend, with Slade named at 12 and Devoto at 13, although the pair often shifted during the game. At the set-piece, Devoto regularly moved inside to 12 to act as a first phase carrier, allowing Slade to be the playmaker further out on second phase.

As things stand, however, Slade looks the more dangerous weapon at 12 - rather than 10 - thanks to the extra time he gets to operate before the defensive line arrives and if his place in the XV is secure, then Hill looks to be the better complimentary centre partner, running lines that give Slade a myriad of possibilities. As rugby brains go, Slade’s operates faster than most and if you give him options, he tends to pick the right one for what the defence is showing.

Devoto has the physical nature to his game to potentially fulfil a similar role to the one Hill provides but he is still a second receiver, playmaker type at his core, as opposed to the direct runner that Hill is.

It is unfortunate that Exeter’s experiments with a more attacking selection came against Wasps and Saracens, arguably the two best sides in the Premiership so far this season, but it is clear that Baxter envisions the trio of Slade, Hill and Devoto as the future for Exeter, even if pragmatism has seen him rein in those plans for the time being.

With all three players 23 years of age, they have potentially a decade together ahead of them and they are too talented of a group not to gel and coexist in the same midfield, but with every game important and the Premiership looking more competitive than ever this season, Exeter may have to put their attacking frisson on ice.