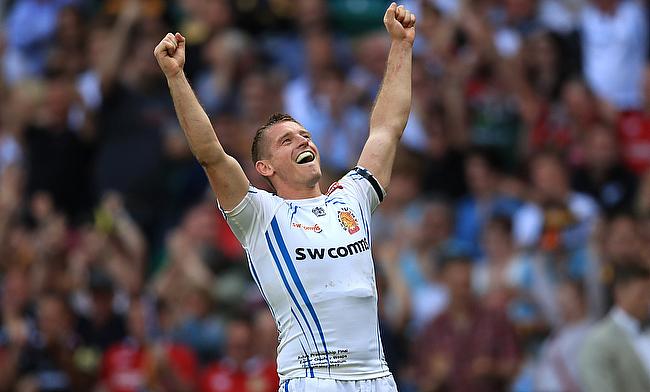 Gareth Steenson scored 15 points with his boot for Exeter
©PA

Exeter Chiefs stretched their lead at the top of the Premiership Rugby table following a convincing 14-35 win over Northampton Saints at Franklin's Gardens on Saturday.

Fly-half Gareth Steenson kicked a sixth minute penalty to begin the proceedings for Exeter Chiefs while Chudley's clever pick-and-kick over the Saints' defence plus a kind bounce saw him score the opening try five minutes later as the visitors went eight points clear.

Northampton's response finally came at the end of the first quarter when winger Ahsee Tuala crashed over the line that was converted by Piers Francis to bring down the gap to just one point.

Steenson added a second penalty when Northampton failed to roll away at a ruck but the Saints had a golden chance before the break to take the lead when they had Exeter under pressure with a scrum on the visitor's line but lost the ball in midfield from the set-piece and saw the Chiefs boot the ball downfield to clear.

And moments after referee Thomas Foley sent home wing Ben Foden to the sin-bin for killing the ball at a ruck, Simmonds was driven over by his pack for his sixth try of the season, with Steenson converting.

Exeter kept the ball up front and, as a result, took a grip on the game. Home replacement prop Francois van Wyk was sin-binned after scrums on the Northampton line constantly went down.

Waldrom drove over from five metres as the Saints' resistance crumbled. But Northampton hit back albeit too late for a losing bonus point when replacement Reinach raced in from 20 metres, with Francis converting.

Exeter had the last laugh when Yeandle dived over for a converted try next to the posts.