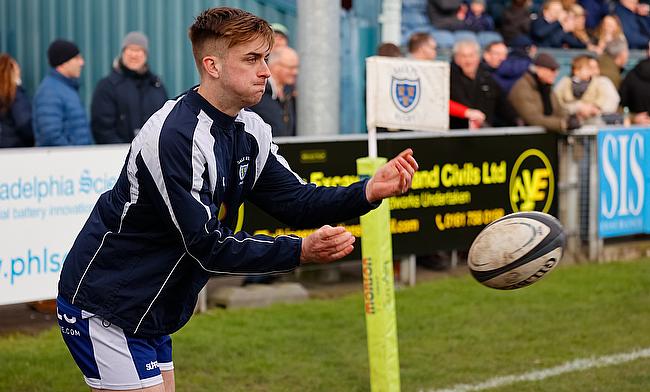 In his first start for Sale Sharks, Metcalf was awarded the man of the match award
©Gareth Lyons

For Jack Metcalf, his journey to playing for Sale Sharks in the Premiership started after a conversation between him and his dad, Chris, whilst plumbing.

It was nearing Christmas in 2020 and the youngster was without a club after Yorkshire Carnegie had folded during the pandemic. He was 19, turning 20 the following April, and just months after making his debut in the Championship, he wasn’t sure what direction his rugby career would take.

After sending Stuart Dixon [who currently leads the Yorkshire Rugby Academy] a message, Metcalf’s highlights were sent across England.

“Fergus Mulchrone [Academy Manager] rang me and asked if I fancied coming to train with them,” Metcalf said. “I was like ‘oh my god, yes 100 per cent’. I had to do a PCR the day before and it was a week after Alex [Sanderson] had joined so I was thinking it was a prime opportunity.

“Whatever was new to the culture I was going to pick up on straight away. I had my PCR, and it came back negative, so I was in the next day at 07:30 for 07:45 gym. That was a bloody early wake up from Leeds.

“I had to be on the motorway every day at 06:15 otherwise I wasn’t getting there. I guess that is what has made the experience so bizarre; commuting for three months before living here and playing for them all in the space of a year. It is all mental, but I have always dreamt of doing it.”

Metcalf was by no means alone in having come from the ruins of Yorkshire Carnegie to play for Sale Sharks. Joe Carpenter and Ben Carlile also made the journey across the Pennines in order to carry on their dream of playing professional rugby.

In the case of Metcalf alone, this has been a fruitful journey, the 21-year-old having made 11 appearances for Alex Sanderson’s side so far this season and scoring four tries in the process.

Most recently, he started in Sharks’ 35-27 win over Newcastle Falcons at the AJ Bell and now his side are preparing for a Champions Cup quarter-final with Racing 92 this Sunday.

Starting the majority of his games on the wing, Metcalf laughs when recalling how he found himself on the flanks. During his youth, the back was largely deployed at centre and full-back, but so determined to impress at Sale when put out on the wing, he didn’t say anything.

“They put me on the wing, and I was like ‘I am not a wing’, but I never actually said anything to them and I was thinking that if it was going to give me an opportunity, I was going to keep my mouth shut,” he said.

“They said that I looked like a winger, and asked why I had never played there [when he did spill the beans]. I didn’t know. We did an in-season friendly against Newcastle and I started on the wing. That was a few weeks before they signed me and I quite enjoyed it. Being out wide, exploiting space and taking people on and scoring tries came with it as well.

“Being in that outside channel, putting kicks through, identifying space, that is my game - running with the ball and having my hands on the ball as well. That is what I love about rugby.”

When it comes to his successes this season, Metcalf’s answer is closely tied with the National Leagues. Throughout the campaign, the 21-year-old has made his way to Heywood Road in order to get game time under his belt in Jonathan Keep’s side.

It’s fair to say that he has excelled, scoring 11 tries as the side vied with Caldy for a place for promotion to the Championship in a National One season which ended with all eyes on the North-West.

“It all started in pre-season,” Metcalf explained. "I didn’t go on the pre-season tour which I was really upset about inside. I went on loan, but I looked at it in a different way. I didn’t complain, I was playing rugby and I was going to be playing every single week.

“I wanted to be at a club where I was going to play every week, getting good quality game time and I wanted to buy into a good culture. Buying into a good culture gets the best out of me, and Briggsy [Neil Briggs] coaches at Sale FC as well, so at the end of Sharks’ pre-season, I started to go there and I absolutely loved it. I couldn’t wait to go to FC training.

“There was lads that I played with at Carnegie, new faces, just a great set of lads that this year have really shown people what they are capable of and I knew four weeks into training with them boys, they could win the league.

“The Academy boys [Sharks loanees to Sale FC] would be talking about it at Sharks, that ‘FC was class’. They were loving it and it was like they couldn’t wait to go there either. Playing well there and doing everything I can there to help them, that is probably where my opportunities at Sharks came from.”

Making his first appearance for Sharks from the bench against Leicester Tigers in November, a week later, Metcalf started at outside centre against Newcastle Falcons and got the man of the match award.

“When I got the man of the match, I was like ‘wow, this is what I want to do’, but at the same time I was thinking that if I keep taking my opportunities at Sharks, the more positive energy I can bring to the lads at FC,” Metcalf said. 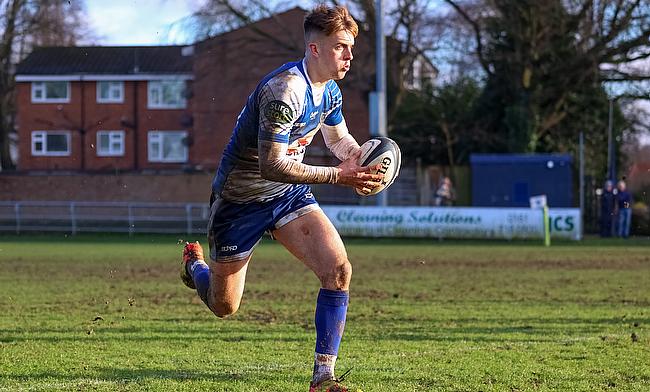 “I went back to FC full of confidence and they were happy to see me progressing, but I was saying we ‘had a job to do in National One’.”

His next appearance would not come for Sharks until January when he scored against Ospreys in the Champions Cup, but it is the weeks that followed which have seen Metcalf find some form of consistency under Alex Sanderson.

Playing in four games in April alone, the one weekend he didn’t wear a Sharks shirt was when Sale FC came up against Caldy at Paton Field in a decisive game between the two sides. Starting at full-back, Metcalf was unable to prevent their hosts from winning 13-9 on the Wirral.

“It was devastating losing against Caldy two weeks ago, but that is sport at the end of the day,” he said.  “The statement we put out against Chinnor to end the year [50-17 win], we are treating that as our first game of the season for next year. It is a really exciting time, especially if they go up.

A last minute Ben Jones penalty secures 4 points which means @CaldyRFC are promoted to the @Champrugby!
See you in the champ Ravers.
Over and out.#Ravers pic.twitter.com/KN8SCLmlhc

“It would be unbelievable for the North-West with them being so close to Sharks as well. That’s where my opportunities have come from this year, succeeding at FC and doing well, just playing well and enjoying myself.”

Metcalf was even doubling up on training sessions in order to carry out his Sharks and FC commitments. Making his way to Tuesday and Thursday night training clearly paid off in a big way, but for the 21-year-old, it was what “you have got to do”.

But where did that attitude come from?

“I used to play Academy football for Doncaster Rovers and Barnsley,” Metcalf revealed. “You get so much rejection. Football is completely different to rugby. When I signed for Barnsley, you were playing against Everton, against Man U, going to all of these unbelievable facilities at 13 and 14 years old.

“They always used to say, ‘cream always rises to the top, work hard, if you get given feedback take it on the chin and you need to react straight away’. I have always kept that in my head, but at the same time, my dad has always told me the same thing. 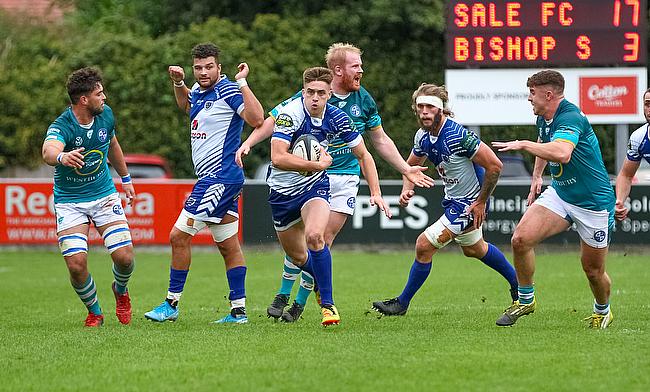 So far this season, Metcalf has scored 11 tries in National 1 and four tries for Sale Sharks
©Gareth Lyons

“That is what my mindset is because I like to prove people wrong. Not in a bad way, just to say I can do it. That is my mindset, and it has helped me massively this year. This is only my fifth year back playing rugby.

Having learnt to play rugby at West Park Leeds RUFC alongside Dan Lancaster and Ben Carlile, Metcalf returned to the team as a Colt and even moved to Bishop Burton College in order to pursue the game at a higher level.

Taken on by the Carnegie Academy for a brief time before being released, he fought his way back into the set-up thanks to his efforts at county level for the Yorkshire U18s, although his Academy season was rather cruelly ended after being knocked out at Welford Road in the warm-up.

The @SaleSharksRugby loanee really knows how to get over the line #SharkDog #Shog pic.twitter.com/iYJox9Aie4

Obtaining a Senior Academy contract despite his setback, Metcalf’s 2019/20 campaign saw him reach the highest of highs, as well as some of the lowest of lows.

Sent on loan to Sedgley Park Tigers in National Two North to play under Scott Barrow [who was a Carnegie Academy coach], Metcalf became accustomed to playing men’s rugby, but as the financial struggles at Headingley intensified, he found himself called in to play in the Championship.

Forever thankful to Phil Davies for the opportunity, to close out the conversation, what the future has in store becomes the primary topic. Metcalf is simply loving life at Carrington, even though as a Yorkshireman who grew up supporting Carnegie and Leeds Rhinos he is a touch out of place.

Much like Metcalf, Sale Sharks’ future is bright. They are still in contention for the play-offs in the Premiership, and as much as the likes of Faf de Klerk, Rohan Janse van Rensburg and Lood de Jager will be leaving the AJ Bell, there is the arrival of George Ford and Jonny Hill to get excited about. 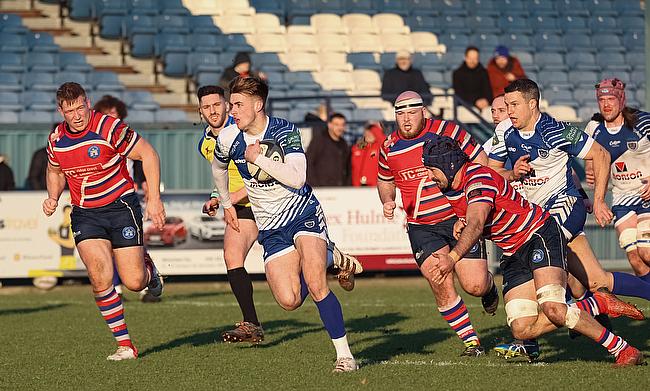 It’s fair to say that the 21-year-old will miss some of his South African colleagues, the lad from Leeds sharing plenty of grins with his teammates, all whilst pinching himself at being able to train and play alongside Rugby World Cup winners and the mercurial Manu Tuilagi.

Even then, in his own mind, it is all down to what he does and sticking to the formula that has served him well thus far.

“Just to keep doing what I am doing, keep taking my opportunities, keep working hard, keep working with the coaching staff, pick the brains of the best players in the world, and just enjoy it, because when I enjoy my rugby, that is when I am at my best I feel,” Metcalf said.

“I do think deeply about things, and sometimes I can’t keep myself to myself because I just want to progress. I’ll come home, watch training and if I see something I shouldn’t have done, I’ll watch it three or four times. That’s just me, that’s what I do.

“You pinch yourself. You are training with Manu Tuilagi or you’ve just caught a ball off Faf de Klerk. Where else would you want to be other than training with Faf, Manu and AJ MacGinty?

“It is madness it really is. Honestly, it is just unbelievable.”