England 'will get the job done' - Ugo Monye 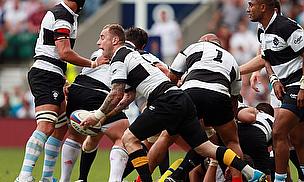 Ugo Monye believes that England can get the "job done" at the Rugby World Cup this autumn and thinks the support of the nation will be vital.

The 31-year-old also stated that Manu Tuilagi will be a miss to the side but thinks the current squad will do fine without him.

Monye retired from the game at the end of the season but has not quite hung his boots up just yet as he is part of a Barbarian squad which takes on England at Twickenham this Sunday.

"We talk about this weight of expectation, but the team have come a long way since the disaster of 2011 World Cup," he said.

"The team really are on an upward curve and with the hopes of a nation in their hearts and the support around them, I am sure the boys will get the job done.

"Manu hasn’t been playing for a little while which is a shame for him, but I guess like Owen Farrell when he picked up an injury, people get opportunities to step up.

"George Ford has done a pretty decent job and Jonathon Joseph (who is England’s player of the year) has really filled those big shoes which Manu has left. Manu will be a miss as he would be to any team, but I think the boys will do fine without.”

Monye called time on his playing days after making over 320 appearances for Harlequins and has the status as a ‘one club man.’

In that time, he won 14 international caps for England and also played two Tests for the British & Irish Lions against South Africa in 2009.

Now Monye is part of a Barbarians squad that defeated Ireland 22-21 on Thursday night in Limerick and the winger is set to play a part at Twickenham this Sunday against his home nation.

He added: "It is amazing to be with the Barbarians. Its just amazing to play and socialise with those boys, but equally it is one of the best jerseys to put on.

"People question whether the Barbarians have a place in the game, but you have only got to see the match against Ireland just to realise what it means to the guys.

"It will be a funny experience for me on Sunday. I know a lot of the boys from playing against them in the Premiership, but clearly I have never played against England and that’s a strange dynamic in itself.

"But I am a professional and a competitor and regardless of the emotions going into the game, I want to win.  I want to give England a tough time on Saturday and of course play well."

Listen here to the full interview with Ugo Monye as he discusses all things Harlequins, Barbarians, Ireland, BT Sport and England:

listen to ‘TRU Exclusive with Ugo Monye’ on audioBoom